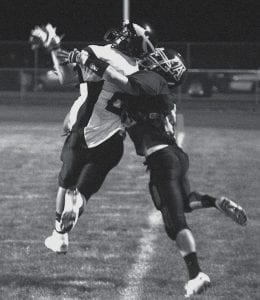 An Apache is called for pass interference as Archbold’s Ian Redd, right, goes up for the ball.- photo by Scott Schultz

It was just what everyone expected when Archbold and Fairview squared off in a nonleague football contest, Friday, Sept. 7.

Preseason publications tabbed senior quarterback Ryan Radcliff as the “Apache Gunslinger.” Match him up against the Blue Streaks’ own Gene Goering, and the passing yardage climbed with every play as the two signal callers combined for 597 yards in the air.

Despite falling behind 21-0, the Gunslinger earned his nickname, bringing his team back by throwing five touchdowns.

Goering tossed a pair of TDs, but a costly interception late in the game and an onside kick handed the Streaks their first loss of the season.

“The two turnovers in the second half were extremely costly,” said John Downey, AHS coach.

AHS struck first. Goering hit Jacob Fidler with a 26-yard touchdown toss at the 4:22 mark of the first quarter. 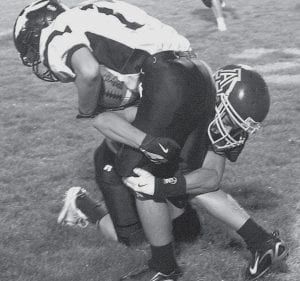 The Blue and Gold struck again just minutes later, as Goering scored on a 3-yard run for a 14-0 lead after the first 12 minutes.

Fidler scored again on a 9- yard run in the opening minutes of the second quarter, upping the advantage to 21-0.

With their no-huddle offense, the Apaches finally started to click in the second quarter. Marching down the field on a five-play drive covering 57 yards in just two minutes, Radcliff hit Ben Wonderly for his first of five touchdown passes, cutting the difference to 21-6.

The game was then halted because of lightning. After an hour delay, the teams took to the field again, with Fidler crossing the goal line from 29 yards out.

The Apaches closed the gap to 28-12 at the half when Radcliff connected with John Elchinger from 3 yards out.

“We were behind, but our kids are older and we have been through some wars,” said Bob Olwin, FHS head coach. “During the rain delay we just talked to them and kept them focused. They came out and made some plays, and that just energized them.”

Eric Sims, Fairview’s kicker, executed a perfect onside kick to start the second half. Traveling 10 yards, the kick hit an Archbold return man in the chest and took a bounce into an awaiting Apache’s hands.

Two plays later Radcliff hit Zeke Keesbury for a 42-yard touchdown, closing the gap to 28-20 after a two-point conversion.

“We did that (the onside kick) in the past,” said Olwin. “We haven’t practiced it a lot, and I think Eric (Sims) misunderstood what I told him to do. But it turned out good for us.”

AHS kept the Apaches at bay when Goering scored on a 4- yard run. Fairview countered when Radcliff hit Wonderly for a 34-yard touchdown.

The Apaches went for the twopoint conversion, and Radcliff crossed the goal line to close the difference to 35-28.

Radcliff then found James Elchinger for a 6-yard touchdown toss, cutting the difference to 42-36 after the two-point conversion.

The Apache defense stepped up and forced AHS to punt on its next possession. Fairview answered with a four-play drive as Radcliff rushed for a 2-yard touchdown. Looking to take their first lead of the night, the Apaches didn’t convert on their point-after-touchdown attempt, and the score was tied at 42.

With 4:22 left, the Streaks had plenty of time to score. Fidler put the Blue and Gold on their own 41-yard line with a 22-yard kickoff return. Goering picked up 5 yards on the ground, Fidler added 7 more, and Goering picked up 2 more.

Wonderly, who led Fairview with 12 receptions for 160 yards, then stepped up to the plate for the visitors- but this time on the defensive side of the ball. Goering dropped back to pass; Wonderly intercepted and raced 40 yards into the end zone for what proved to be the winning touchdown.

“We were matched up on the interception,” said Olwin. “Ben (Wonderly) just stepped in front of the pass and took it to the house.”

AHS still had one shot left with 2:42 to play, but an incomplete pass on fourth-and-third in Apache territory sealed the victory for Fairview.

“We turned the ball over in the second half,” said Downey. “We gave them an easy touchdown and good field position on the two turnovers.

“They played hard and played a great game. Our kids played hard; we had too many mistakes. Penalties hurt us and (we) missed tackles.

The Streaks play at Evergreen, Friday, Sept. 14 in an NWOAL contest.