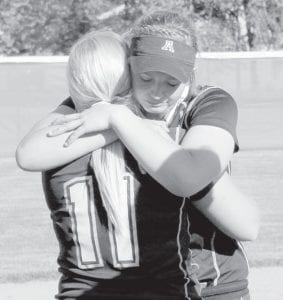 Hanna Allison (11), Archbold’s sole senior on the softball team, is consoled by Cassi Wyse after the Blue Streaks were defeated by Fairview in the district final.– photo by Mary Huber

The Apaches took the lead in the second inning with two runs. With one out, Ali Hug singled and then scored on a Blue Streak throwing error, which also resulted in Blakelyn Sheets advancing to second base.

Sheets moved to third on a wild pitch, and scored on a dropped ball at the plate after being caught in a rundown.

The Apaches took a 4- 0 lead in the fifth. Natalie Meyer led off with a single, advanced to second on a wild pitch, and then stole third.

After a groundout, the next two Apache batters were walked to load the bases with one out.

The Streaks scored two runs in the sixth when freshman Payton Robinson drove home Cassidy Wyse, who had doubled, and Jesse Fidler, who had reached base on an error.

Archbold had one last chance in the seventh. Cassidy Williams, who reached base via error, scored on a Wyse double to close the difference to 4-3.

The Streaks then hit a pop-up to first base, ending the game.

Archbold, which finished 26-2, collected eight hits while Fairview had four. Wyse led the way, going 3-4 with a single and two doubles, while Robinson was 2-3.

Hanna Allison was the losing pitcher. She gave up four runs, all unearned, while striking out four and walking two.

“This was a tough way to end the season,” said Joe Frank, AHS head coach.

“We had been playing so well defensively, but today just was not our day. We were our own worst enemy, but that is what happens a lot of times in tournament play.

“They hit three or four balls out of the infield, but we just were not able to take advantage of the ground balls hit at us today.

“Offensively, we just didn’t get the production we normally get through our first five hitters.

“Cassidy Wyse was 3-4, but we just couldn’t stay off the high pitches today, and hit a lot of pop-ups.

“Even though we lost the game, I want to say how proud I am of us fighting to the end. It just wasn’t our day, and a lot of credit goes to Fairview.

“We had 26 wins this year, which ties the school record, and won a share of the Northwest Ohio Athletic League title. Those are great accomplishments, and this team has a lot to be proud of.

“Our coaching staff had a lot of fun this year coaching this group, and we are fortunate to have everyone back except Hanna (Allison).

“Hanna had a great year, both pitching and hitting, and will be hard to replace.