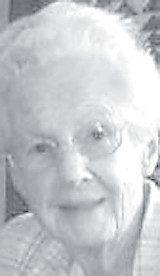 Her parents were Raymond and Dora (Short) Nafziger. She was the oldest of their children– Maurice, Ada, Alice, and Paul.

They have all preceded her in death.

She married Peter Kiesow in 1958, and they were blessed with a daughter, Amy Kiesow Austin of Pueblo, Colo.

Her first job after graduating from Archbold High School was as bookkeeper at Stotzer Hardware. Later, she graduated from Goshen (Ind.) College with a degree in elementary education.

She enjoyed being with children– as a mother, aunt and teacher.

She taught Sunday School classes of all ages. She taught summer Bible school in Toledo, Arkansas, North Dakota, Minnesota, Alberta, and at Inlet Mennonite Church, where she was a member.

She taught first grade at Archbold, then went to Calling Lake, Alberta, Canada, in a voluntary service program. There she taught the first three grades in an isolated village– in a log school.

Later, she started a kindergarten, primarily for children who did not speak English.

It was in Alberta that she met her husband Peter, who had come from Germany to work. Their daughter was born in Alberta. Later they moved to Ohio.

In Ohio, she worked in the childrens department at the local library. In retirement, she enjoyed many years of mentoring at Homework Table at the Lutheran Church and at Pettisville School.

She and Peter– sometimes with Amy– had many good times traveling in the United States, Canada, Europe and South America.

She is survived by her loving husband, Peter; a dear daughter, Amy; and a chosen daughter, Christina (Bruce) Holland of Archbold. Other survivors are three sisters-in-law, Donna Nafziger, Archbold, Ella Nafziger, Archbold, and Christiane Brinck, Sherwood Park, Alberta, Canada; and a brother-in-law, Helmut Kiesow, Hamburg, Germany. Also many nieces and nephews, who she enjoyed.

Memorial services will be held on Thursday, Feb. 1, at 11 a.m. at the Fairlawn Chapel with Pastor Rick Jones officiating. Interment will be in the Pettisville Cemetery.

The family suggests that memorials be given to Mennonite Disaster Service. www.ShortFuneralHome.com.