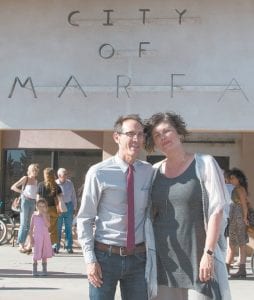 Ann Marie Nafziger, an Archbold graduate, accomplished artist, and now the mayor of the city of Marfa, Texas, with her husband, Peter Stanley, in front of the Marfa town hall. She handily won a three-way race for the post on May 6.– courtesy photo

A second Archbold-area native has started a foray into Texas politics.

Ann Marie Nafziger, AHS ‘90, has been elected the mayor of Marfa, Texas, in the far-west portion of the state.

She follows in the footsteps of Max Nofziger, of rural Archbold and Austin, Texas. He was an Austin city councilman and mayoral candidate.

After Nafziger graduated from Goshen (Ind.) College in 1994 with a bachelor’s degree in studio art, she moved to Portland, Ore., where she lived for 10 years.

She pursued her career as a painter in Portland.

“I was really interested in some of the art things that are happening here in Marfa, so I came to visit at that time,” she said.

She returned occasionally, compelled by the arts community and the landscape.

“It’s pretty much the complete opposite of the Pacific Northwest, where I was living,” she said.

She made friends in Marfa, and met her husband, Peter Stanley, there.

After a long-distance romance, she moved to Marfa.

“Somehow, I had thought he was going to move to Portland, but I ended up moving to Marfa,” she said.

“I’ve been here since 2002 and (am) active in the arts community, as well as the school. I do a lot of work around education and some fundraising and non-profit work– things like that.”

After marrying, they returned to get master’s degrees in Houston: his in architecture, hers in painting.

Marfa is a town of about 2,000 people. It is the county seat of Presidio County.

Comparatively, Archbold has about 4,400 residents, and Fulton County is 407 square miles in size with about 42,600 people.

“We have a real small public school. There’s about 350 students,” she said.

By comparison, the Pettisville school district has about 540 students.

Marfa is a unique story. Nafziger said the town has families that are, or were, involved in ranching for generations.

Being 60 miles from the Mexican border, “We’re not right on the border, but we’re definitely affected by being on the border,” she said.

“We have our border patrol headquarters here. We’re about 85% Mexican-American.”

In the late 1980s, Donald Judd, an artist working in New York City, obtained funding from a large organization and began purchasing property in Marfa, including an abandoned U.S. Army base.

Judd wanted to create large pieces of art. He invited other artists to Marfa, as well.

It was actually before the start of a trend in the contemporary art world of buying old warehouse space or loft space for use as studios, Nafziger said.

“It was an artist’s dream. ‘Wow, cheap space, I don’t have to work much and I can concentrate on making my paintings or my sculptures.’

“It was radical for contemporary art. You can imagine how radical it would be in a small ranching town in Texas.”

The Chinati Foundation was created to display Judd’s and others’ large-scale works in the restored buildings on the old Army base and a few downtown buildings.

Nafziger worked at the Foundation.

Her husband currently works at Chinati, using his architectural skills to maintain and develop the buildings.

The museum has grown.

“For a little town of 2,000 people, tourism is the main economic driver.”

In a small town, it’s easy to get involved, she said. She served on boards such as the parks & recreation board.

When the former mayor opted not to seek reelection, people began asking her to run.

“I said no. And then a few more people asked, and I kept saying no.”

But then, “I started to see where it was an opportunity for me to make an impact.”

In her 15 years in Marfa, she worked with many different groups including artists, ranchers, and others. That, she said, has been a plus.

“I don’t know if you can call it a landslide,” she said

She was sworn into office a week later. The event was highlighted by a surprise visit from her brother, Kent Nafziger, from Archbold.

As mayor, she is currently learning how the city operates on a day-to-day basis.

But, she also has issues she wants to work on.

“One of them is, we have a senior center here with a meals on wheels program as well as a congregant program. That’s one of the programs that kind of needs a bit of a boost,” she said.

Also, a lot of people in Marfa are becoming interested in becoming involved in their community.

“Our city council meetings have a really big audience,” she said.

“I’m trying to keep in mind how I can put those folks to use.”

“It’s a fascinating place,” she said.

“Obviously, I really love it here.

“I have gotten to know people who are so far out of the kind of folks I would probably spend time with if I lived in a large city. That’s really interesting to me.

“I would have never imagined myself living, first of all, in a small town and being the mayor. So see what happens next.