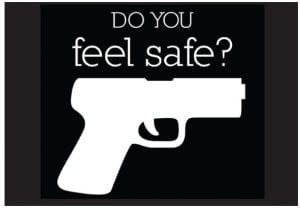 America has a thing about guns. Internet research shows there are about 300 million guns in the United States– almost one for every man, woman, and child in the country. With just four percent of the world’s population, Americans have 42% of all the civilian-owned guns in the world.

Guns play a large part in American culture. Rudimentary muskets were used to fight the British and win America’s independence. In the hands of a hunter, guns put food on the table. They were the tool “that won the West.” Ever see a cowboy movie where the hero– or the villain– didn’t have a six-gun strapped to his side?

In many families, guns are a right of passage. Fathers spend hours teaching sons and daughters how to properly handle– and shoot– a gun that may have been passed down from a grandfather. Guns can provide hours of pleasure, punching holes in tin cans or paper targets or providing a freezer full of venison.

Yet America pays the price for its love affair with guns. That price? Mass shootings.

Columbine. Sandy Hook. Virginia Tech. Aurora, Colo. Fort Hood. Orlando. Dallas. Las Vegas. And now, Sutherland Springs, Texas. The names are enough– we know each is the site of a mass killing, where someone with a gun killed innocents, sometimes for no explainable reason.

What can be done? Can gun violence be stopped without taking away America’s guns?

Let’s hope so, and soon, before mass shootings become so commonplace that they won’t be considered news anymore.

Should Students Have To Wear Face Masks During Physical Education Classes And At Recess?Letter To The EditorGolden Notes Of Archbold’s Memorable Past