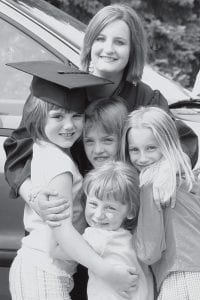 Holly Rychener, a member of the newest group of Pettisville High School alumni, receives congratulations from her nieces following the PHS graduation ceremony, Sunday, May 25. Middle row, from left: Samantha Boger (with cap), Kenzie Morgan, and Jocelyn White. At the front of the group is 3-year-old Taylor Boger. The Bogers and Morgan are from Wauseon. White traveled to Pettisville from Virginia to see her aunt graduate.- photo by D.J. Neuenschwander

Of the 49 Pettisville High School seniors who received diplomas Sunday, May 25, about 45%, or 22 students, were recognized for having grade point averages of 3.3 or higher on a 4.0 scale.

Top scholar of the class was Morgan Lantz, who graduated with a 3.95 GPA.

In addition to receiving an honors diploma and being class president, Spotts also received the Citizenship award, the top honor Pettisville High School awards each year.

It is given to the student chosen by the Pettisville High School faculty and class officers, and is based on scholarship, support of school, character, participation, and attitude.

Richard Reid read a long list of scholarships that went to various graduates. In all, 28 graduates earned one or more scholarships, and, according to Reid, if all students are able to use and retain their scholarship awards, the total value would be $765,000.

Rebecca Dadisman, Pettisville English instructor, gave the commencement address. Dadisman offered the graduates what she called “motherly advice,” and used quotes from pop music to remind the graduates that, “There is only one of you” and, “I will always love you.”

Anna Borton, one of the graduating seniors, also spoke to her classmates. Borton told the class they would need to “be different to make a difference.”

She applauded the Pettisville school system for the strong values that were represented by the faculty and families of the students. She encouraged the new graduates to stand strong in values.

Matt Dougherty and Michael Ferguson also addressed the class in a combined speech.

The duo used humor to remind fellow grads they were entering new lives where they could become whatever they wanted.

Dougherty and Ferguson wished their classmates lives that were filled with passion and happiness, and told them not to take themselves either too seriously or too lightly. – D.J. Neuenschwander