Jobe A. Gonzales-Reynolds, 21, Fayette, the man who allegedly led Darrell Merillat, Fulton County Sheriff, and his deputies on a chase through western Fulton County, Tuesday, July 17, has been indicted.

He was one of 21 persons indicted by the Fulton County Grand Jury, Monday, Aug. 20, Scott Haselman, Fulton County prosecuting attorney, said in a press release.

Gomez was indicted on two counts of insurance fraud. Delaney and Spiess were each indicted in connection with the theft of bronze grave markers from cemeteries in the Wauseon area.

Gonzales-Reynolds was indicted on one count each of grand theft of a motor vehicle, failure to comply with the order or signal of a police officer, felonious assault, and felony vandalism.

He allegedly stole a car from a mobile home park outside Fayette. 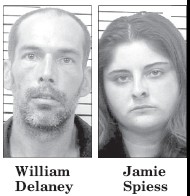 As a Fulton County sheriff deputy was on his way to the mobile home park to take a report on the theft, he passed by a vehicle matching the description of the stolen auto, and the chase was on.

For more than half an hour, the stolen car zoomed through Archbold, Pettisville, and on county roads and state highways between the two communities.

The stolen auto hit spike strips deployed by Archbold police. Eventually, the front tires were destroyed, and the stolen auto was riding on its front rim.

It eventually crashed into one of the Hit Trophy buildings at the intersection of St. Rts. 66 & 2 and Co. Rd. E.

In a press release, Haselman said, “on or about July 17, he (Gonzales-Reynolds) allegedly failed to stop his motor vehicle after receiving a visible or audible signal from a police officer, allegedly causing a substantial risk of serious physical harm to persons or property.”

Allegedly, on or about May 10 to Oct. 26, 2011, and March 19 to March 30, he allegedly presented to an insurer a statement, application or claim, knowing it was false or deceptive.

Spiess and Delaney were each indicted on a single count of receiving stolen property.

“On or about Aug. 1, (they) allegedly received bronze medallions and stakes knowing or having reasonable cause to believe they were stolen,” Haselman’s release said.