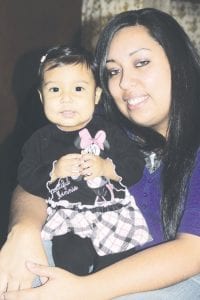 Alianna Gabriella Gonzales will soon be one year old, and her reign as the Archbold Buckeye First Baby of the Year comes to an end. She was born at 10:18 pm Jan. 8, 2011, at Fulton County Health Center. With Alianna is her mother, Mary Zamora. Alianna points the way… to the future?– photos by David Pugh

Alianna Gabriella Gonzales isn’t a shy little girl at all.

Her mother, Mary Zamora, said her almost-one-year-old daughter will be in a cart at a store, and if a stranger smiles at her, she’ll smile right back.

“She’ll play with anybody,” Mary said.

Alianna is the Archbold Buckeye First Baby of 2011, born Jan. 8 at 10:18 pm at the Fulton County Health Center.

Mary was sent home with a monitor. If Alianna stopped breathing, it would sound an alarm “like a smoke detector,” Mary said.

After about six weeks, the monitor showed Alianna had not stopped breathing for 12 hours. She was ready to come off the machine, but physicians gave Mary an additional two weeks, “because I was scared.” 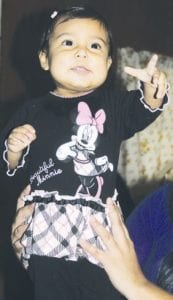 Alianna is, after all, Mary’s first child.

“I will still get a feeling, and I’ll check on her,” Mary said.

Today, Mary reports her daughter “is a little small for her age.” But that’s not because she’s a fussy eater.

“She’ll eat anything we give her. Little french fries, eggs, sausage,” Mary said.

Her favorite foods include potatoes, of any kind– roasted, french fried, mashed.

“Her favorite is applesauce. She knows the jar,” when they get it out of the cupboard.”

Alianna weighed 7 pounds, 10 ounces, and was 20 inches long when she was born. Now she weighs 17 pounds, is 26 inches tall, and has eight teeth.

She doesn’t mind being dressed up, “but she doesn’t like me to do her hair,” Mary said.

Alianna sleeps through the night now, and that’s her mother’s doing.

“I put her on a schedule. I don’t let her sleep a whole lot during the day,” Mary said.

Crawling, Getting Into Things

Alianna didn’t start crawling until she was 9 1/2 months old.

Mary said she took her for a nine-month checkup. The doctor said at her age, she should start crawling and pulling herself up on furniture.

“I started working with her, and two weeks later, she started.”

Alianna has gotten herself up, and so far, has taken one step.

The family keeps a stack of DVDs in their cases, near the floor where the little girl can reach them.

“She loves to get them all out, and spread them all over the floor,” Mary said.

When the family watches movies on DVD, Alianna knows what button to push to stop the show.

It’s not that Alianna doesn’t have toys of her own. Her favorite is a stuffed monkey. She will hold the monkey like a baby and rock it.

There are other toys, too.

“She loves things that light up. Anything with lights,” Mary said.

Alianna plays with twin three-year-old cousins, Nadia and Reina Nevaeh, Archbold, and Brody Saurez, who also is about one. Brody is the child of Mary’s friend, Sara.

The Archbold Buckeye First Baby of 2012 will be the first child born at any hospital after 12 am, Saturday, Jan. 1, 2012, to parents living in the Archbold or Pettisville school districts.

Alianna’s successor will be featured in one of the first issues of the Archbold Buckeye in 2012 and receive a multitude of gifts from area businesses.

Parents who think their baby may be the Archbold Buckeye First Baby of 2012 should refer to page 8 for details and information on how to report the birth to the Buckeye.–David Pugh