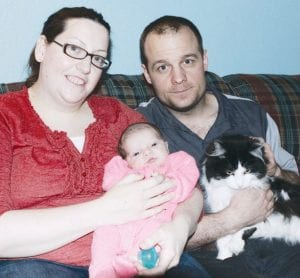 Alexandria Grace Beck, the Archbold Buckeye First Baby of 2013, with her parents, Jessica Potts and Jeff Beck, and her “watchdog,” Oliver the cat.– photo by Mary Huber

The daughter of Jeff Beck and Jessica Potts, Archbold, Alexandria’s due date was predicted to be Dec. 21, 2012.

“I’ve been calling her an overcooked Butterball turkey because she was so big,” said Jessica.

Alexandria weighed 8 pounds, 15 ounces, and was 20 1/2 inches long when she was born at the Fulton County Health Center, Wauseon.

She has brown hair and blue-green eyes, and has been eating every one to two hours since she came home on Thursday, Jan. 3.

“The first night we had her home she did not sleep at all,” said Jessica.

Jeff, who picked the name Alexandria, is a 1997 Archbold High School graduate. He has been a service technician at Christy Motor Sales, Archbold, for 11 years.

Jessica, a 2000 graduate of Hilltop High School, has worked in the office of Granite Industries, Archbold, since July 2012.

Her mother, Paulette Potts, who died in October, picked the middle name of Grace.

Early in the pregnancy Jessica craved watermelon, but in the third trimester she wanted cooked cabbage and sauerkraut.

“I don’t like cooked cabbage,” she said. “So it was really strange that that’s what I wanted to eat.”

Oliver, the couple’s fiveyear old cat, was a little leery of the new addition to the family.

“He was kind of scared of her at first,” said Jeff.

But now, “He’s been kind of like a watchdog,” said Jessica. “If she’s in the bed, he’ll just kind of sit and watch her.”

Her great-grandmother is Inez Potts, Fayette.

As the Archbold Buckeye First Baby of 2013, Alexandria received several gifts, including:

•and a year’s subscription to the Archbold Buckeye.– Mary Huber