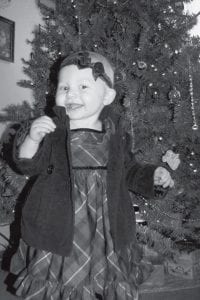 Alaina Ann Gerken, the Archbold Buckeye First Baby of 2008, adores animals- even if they’re not fond of her.

When she was born Jan. 8, 2008, her parents, Phil and Kate, had two cats and a chocolate Labrador named Anderson.

While the dog was very protective of her, the cats didn’t seem to understand why Alaina joined their household in Ridgeville Corners.

Over the past year, that hasn’t really changed.

“The cats don’t really like her as much,” said Kate. “Anderson will be laying on his bed, and she’ll open his eyes when he’s sleeping, put her fingers up his nose… but she loves the kitties. She says ‘kitty.'”

“They’ll sit still a little bit and let her pet them, but not for long,” said Phil. They’ll just walk away.

“And then she’ll give it back to him and he’ll chew on it,” said Phil.

“For some reason, the dog toys are much more attractive than her own toys,” said Kate.

“She had a good time at the Henry County Fair. She loved the animals. She would stick her hands in with the pigs.”

Alaina gets her love of animals from her mom, who’s a veterinarian.

“So far the only thing she doesn’t like is Santa Claus,” said Kate. “He was a little bit scary.”

Alaina started getting teeth when she was about five months old, and now has five front teeth.

She started walking at the beginning of December, although a favorite activity is crawling up the stairs in their two-story house.

Kate says Alaina is a good sleeper. “She sleeps between eight and 12 hours a night,” she said.

Alaina loves Cheerios and likes to eat “just about everything,” said Kate. “She’s taken a liking to more adult-like foods. She’s not a big mushedup food fan. The chunkier it is the better.

“She loves green beans in pieces; we cannot mush them up. She likes french fries, chicken nuggets,” all vegetables, really- even spinach.

“She loved the food” at Thanksgiving, said Kate. “She ate a lot. Mashed potatoes, corn, green beans, sweet potatoes, stuffing. And she loves pumpkin. Sweets are definitely her weakness.”

Alaina finds television a little “boring,” said Phil. “She’ll watch TV if sports is on and it’s moving kind of fast. She’ll watch it not more than a minute, though.”

She really likes her books and music, her parents said.

“I’m the music fan in the family, and she does like music quite a bit,” said Kate. “She’ll dance with me.”

“She’s very independent,” said Kate. “You lay her in the bed and she goes to sleep. She’s not very much of a cuddler or snuggler. She’s never been like that.

“She always likes her baths, though,” said Phil.

“She loves water,” said Kate. “We went to the lake this summer down in Tennessee and she, except for the life jacket, loved the water. She thought it was great.”

When it’s bath-time, “she stands at the bathtub and jumps up and down, like, ‘ooh, this is fun.’ She gets excited,” said Kate.

Alaina is also very outgoing. In church, “She will not sit still…she just has to go, go go,” said Kate. “She won’t play with anything…that’s not enough for her. She wants to be crawling under the pews. She’s very busy.

“She tries to sing to the music in church. She definitely likes to talk. We always call it ‘joyful shouts to the Lord.’ rather than just being bad.

“She doesn’t know very many strangers. That’s why we were surprised she wasn’t a fan of Santa. She’s very friendly with most people.

“Phil and I really weren’t like that when we were kids. We were very shy. So it’s interesting to see that part of her. She’s definitely like our sisters…very outgoing right away. Phil and I are more reserved. It’s a different perspective for us.”

She takes after her dad in a couple of ways, though.

“She does make a lot of faces like her dad,” said Kate. “She has very active eyebrows. She’s always raising her eyebrows at something or looking at something, and that’s exactly like her father. It’s amazing.

“And it’s not just me that’s noticed it. So many people” have noticed it.

“She’ll make a face and they’ll be like ‘oh my gosh, she moves her eyebrows just like Phil does!'”

After Alaina gives up her 2008 reign, the Archbold Buckeye First Baby of 2009 will be the first child born after midnight, Wednesday, Dec. 31, 2008, to parents living in the Archbold or Pettisville school districts.

Alaina’s successor will be featured in one of the first issues of the Archbold Buckeye in 2009 and receive a multitude of gifts from area businesses.

Parents who think their baby may be the Archbold Buckeye First Baby of 2009 should refer to page 7 for details and information on how to report the birth to the Buckeye.- Mary Huber