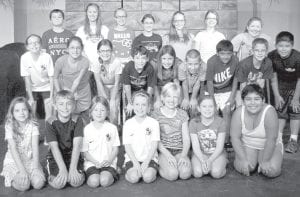 When the curtain opens on the Archbold Community Theatre performance of “Aladdin, Jr.,” none of those on stage will be older than a high school sophomore.

The youngest are secondgrade students.

ACT officials said 27 children from throughout the area, including 14 from Archbold, have been rehearsing for the show, which opens Saturday, Sept. 27, at 7:30 pm.

The Giffey Hall stage in Ridgeville Corners has been transformed into the fictional Middle Eastern city of Agrabah, where the story of Aladdin and Princess Jasmine plays out with help from a magical genie.

William Nofziger has the role of Aladdin; Erin Reichert portrays Jasmine. The two are from Archbold.

“Aladdin Jr.” is based on the 1992 Disney animated movie which boasted an award-winning score. The show is billed as family entertainment.