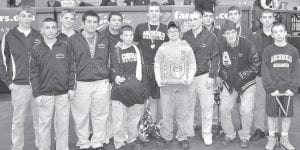 The Streaks tallied 115 points to claim the title. Delta finished second with 96, followed by Elmwood 95, Carey 85, and Ayersville 83.

“I thought we wrestled pretty well in the semifi- nals,” said Brian Becher, Archbold head coach. “When you go four-for-four in the semifinals, you can’t really complain about that.

“I thought we would come back through in a couple of those consolation brackets, but some of those guys didn’t wrestle the match they needed to wrestle, and that’s how it goes here.

“I thought coming in here we didn’t have very good draws, but we did get four guys out, so hopefully we’ll get more favorable draws next weekend.”

The district title is Archbold’s first since 2003.

“It has been a long time,” said Becher. “Coach (Luke) Stuckey was a sophomore and coach (Cody) Ruffer was a freshman on that team.”

Becher gave credit to the whole team, not just the qualifiers.

“It takes a total team effort to get something like this done,” he said.

“The bigger thing is getting those qualifiers to Columbus.

“But the district championship is something nice for those guys that necessarily didn’t qualify, that they can feel like they were part of something here that was good for the team.”