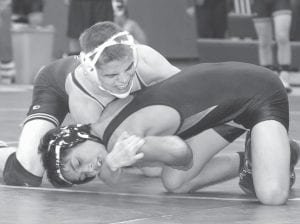 Archbold’s Logan Day, top, scored a technical fall over Delta’s Christian Valentine, Thursday, Dec. 8. Day went 2-0 on the night after pinning his Bryan opponent. The Streaks defeated the Panthers and Golden Bears to start the NWOAL season with a 2-0 record.– photo by Scott Schultz

Archbold kicked off the wrestling season with a 44- 22 win over Delta and a 53-22 victory over Bryan in Northwest Ohio Athletic League action, Thursday, Dec. 8, at Swanton.

The Streaks faced Delta in the opening match. Travis Jaramillo put AHS up 6-0 with a pin over Blake Parker at 220 pounds.

The Panthers were void in the heavyweight class, giving Archbold a 12-0 lead.

Damian Short, a freshman in his first varsity match, lost a tight 3-2 match with Kyle Keller at 106 lbs.

“Coming out and getting two pins was huge,” said Brian Becher, AHS head coach, “and then Damian Short’s match was huge, even though he lost in a close match against a tough kid.

“That gave the other guys a big mental boost.”

Archbold’s Drew Coffey and James Dailey squared off next at 113 lbs.

Dailey scored first on a takedown but Coffey managed an escape as the first period came to a close.

Coffey started in the down position to start the second. He scored an escape and added a takedown for a 4-2 lead on his way to a 9-3 victory.

Seth Calvin broke the Panthers’ drought with a pin over Justice Zimmerman, and Luke Kern handed Oliver Stuckey an 11-2 loss to close the gap to 23-16.

Jordan Cowell, an AHS senior, and Tyler Fahrer went at each other at 152 lbs. for six minutes, with Cowell picking up a 7-5 win.

Austin Ripke added to the Archbold team score in the 160-lb. class with a pin over Conner Keller.

Archbold had little trouble with the Golden Bears, with Coffey, Eggers, Day and Jaramillo all recording pins.

Stuckey lost a 12-3 major decision to Sheldon Struble at 145 lbs.

Ripke recorded a 15-3 major decision over Brock Nagel at 160 lbs. Archbold’s Jose Hernandez scored a 9- 5 win over Bronson Beck in the final match of the night at 220 lbs.

“Obviously, our first match of the year I think nerves played into some of the guys,” said Becher.

“They had some adrenaline flowing, and when that ran out they kind of hit a wall in some of the matches.

“We do need to get in better shape. I am hoping it was first-match jitters, but I guess we will find out.”