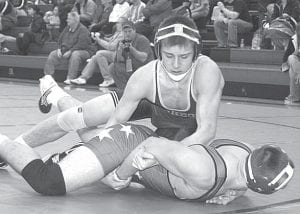 The Archbold wrestlers traveled to Wauseon, Thursday, Dec. 15, where they defeated Patrick Henry, and in the nightcap, faced the host Indians.

With just seven wrestlers, the Streaks had little trouble defeating PH 71-7, but fell 44-30 to Wauseon, the Northwest Ohio Athletic League favorite who is ranked 10th in the first Division II state poll of the season.

The Streaks, ranked seventh in D-III, are 3-1 in the dual portion of the league schedule.

“I told our guys, the biggest thing tonight– Wauseon is meaner than we are, and till we get mean, teams like Wauseon are going to take it to us,” said Brian Becher, Archbold head coach. Ripke Gets 100th Win

The Streaks built a 29-3 lead over PH before senior Austin Ripke took the mat in the 170-pound weight class.

Ripke held a slim 5-4 lead over Keith Palmer heading into the second period. Starting in the down position to start the period, Ripke scored on a reversal and added three back points on his way to a 11-8 lead heading into the final two minutes. 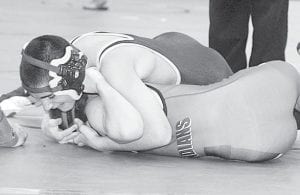 PH picked up a win at 138 lbs. with Brandon Cole defeating Justice Zimmerman.

Galen Power was the only other Patriot to record a win, a 12-2 major decision over Kellen Seaman at 182 lbs. Wauseon: Down To The Wire

Even though the Indians look to be the top team in the NWOAL, the rivalry between the two squads heated up from the beginning.

Kenny Price, an AHS state qualifier, and Jacob Whitcomb squared off at 132 lbs. for the first match.

Three periods weren’t enough as regulation ended with the score tied at 3.

The first overtime is one minute. With neither wrestler scoring a point, they went to a second OT.

Whitcomb took the down position to start. Price held him off, sending the match into a third OT.

Price started down to start the third. He was unable to score, sending the match into a fourth overtime. Whitcomb, who started in the down position, managed an escape to pick up a 4-3 win.

Dalton Nicely (145 lbs.) added six more for Wauseon with a pin of Oliver Stuckey for a 15-0 lead.

The Streaks finally got on the scoreboard at 152 lbs. when Jordan Cowell pinned Aaron Schuette at 5:07.

With Archbold trailing 15- 6, Ripke couldn’t have picked a better time to get his 101st career win. Facing Zac Stewart, Ripke trailed 2-1 after a tight first period.

The Blue Streak led 7-5 heading into the final two minutes. Stewart started down and scored on a reversal, knotting the score at 7. Ripke returned the favor with a reversal and put Schuette on his back at 5:56, closing the difference to 15- 12.

“Congratulations to Austin for getting his 100th win,” said Becher. “Austin is a fantastic wrestler.

“He tweaked his shoulder a little bit in that last match, and he has to learn to fight through that.

“Other guys see that that bothers him and makes them feel they are in the match. He just has to learn to fight through that injury.

“Obviously he still sucked it up and got the pin for us at the end.”

Wauseon picked up the next two weight classes with a pair of pins by Travis Schroeder and Alec Vonier to up the lead to 27-12.

The Streaks came back with a pin from Jose Hernandez (285 lbs.) over Antonio Torres.

Damian Short (106 lbs.), a freshman, faced Jackson Sluder and gave Archbold a much-needed six points with a pin at 3:26.

“How things were going earlier in the match, I was surprised it was that close heading into those final matches,” said Becher.

“We had guys step up there at the end. Jose (Hernandez) got a big pin for us and Damian got a pin for us. Damian is not much of a pinner, but I was confident he would win the match. He doesn’t always stay in good position when he gets guys on his back, but he adjusted and got the fall for us.

“We burst our bubble right away. Kenny (Price) is a sophomore, but at the same time he is a state qualifier. People expect him to win, and to lose in overtime criteria just burst our bubble.

“Stuckey got pinned and Kellen (Seaman) got clamped and rolled right to his back and got stuck. I thought those were three key matches for Wauseon in winning the dual meet.”