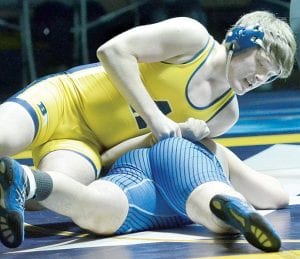 “It’s nice to have an oldschool dual meet,” said Brian Becher, AHS head coach. “I don’t think the kids have ever seen one before.

“We’re gonna try to schedule more of these.”

The Streaks turned a close contest into a runaway 45-22 non-league victory.

The match started with the 195-pound weight class. Gibson Burkholder won with a pin over Preston Foor in 58 seconds.

Spencer Simon (285 lbs.) fell to Jonah Schlegel by fall to give the Dogs their first points. 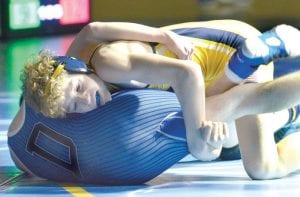 Rusty Short (113 lbs.) finishes a takedown of Lance Armstrong at the edge of the mat.

Brennan Short (152 lbs.) dropped a 4-3 decision to Jacob Hatchett, but it was the last win the Bulldogs would record.

“I thought it was a pretty good team effort,” said Becher. “Little things we’ve got to fix, but it’s still the beginning of January, so we’ve got a lot of time yet.” 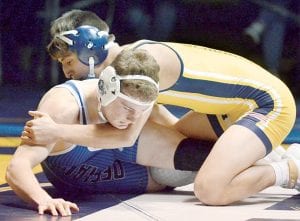 Zach Rocha (138 lbs.) scores a takedown of Logan Elkins and looks for near fall criteria.

The tournament consists of teams from Ohio, Indiana and Michigan.

Niles (Mi.) was the tournament champion with 168.5 points.

Sandusky placed second with 129. Archbold was ninth with 85.5 points.

B. Short was Archbold’s highest-place finisher, placing third at 145 lbs.

Schaffner placed fifth at 160 lbs. Francis was sixth at 120 lbs. and Eicher finished eighth at 126 lbs. 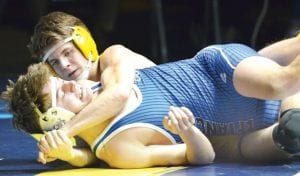 Brennan Short (152 lbs.) scores back points and looks for the fall in his match with Jacob Hatchett.