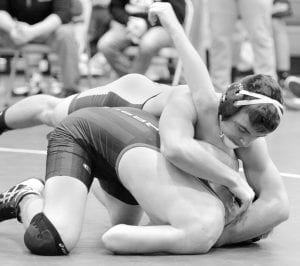 Josh Nofzinger drives his Swanton opponent to his back and gets the pin in the Div. III Region 17 state wrestling duals tournament, Saturday, Feb. 8.– photo by Mario Gomez

But the Streaks couldn’t pull out the win as the Royals scored the final 18 points on two pins and a forfeit, knocking Archbold out of the Division III Region 17 state wrestling duals tournament, 37-30.

“We knew that they were going to score more than us up top,” said Brian Becher, AHS head coach. “We had to score through the middle to get the win.

“The region is down quite a bit. I thought we had a really good chance to qualify for state this year.

“We matched up really well with Eastwood in the next round. But I thought most of our kids wrestled hard.”

The fourth seed, Archbold easily dispatched of Swanton in its first match, 69-12.

In the quarterfinals, the Streaks faced Elmwood, who defeated Columbus Grove in its first match.

Archbold started with a pair of wins.

Fryman won by injury default, followed by Bowerman winning by forfeit for a 12-0 lead.

After losing to the Royals at 132 lbs., Garcia and B. Short won consecutive matches with a decision and a pin, respectively, to give Archbold a 24-7 lead.

Elmwood won the next three weight classes, cutting into the Archbold lead, 24- 19.

Meyer got Archbold’s final win with a pin to make the score 30-19, setting up the Elmwood comeback.

“There were two big swing matches, and we lost both of them,” said Becher. “Some of our guys just can’t deal with pressure situations.

“Until they’re able to do that and perform at the same level whether the pressure is on or there is no pressure, they are going to continue to be disappointed in their performance.

“If they don’t fix it by the end of the year, they are going to be crying in the back gym at Archbold or at districts because they just need to wrestle and not worry about winning and losing.”

Eastwood was the eventual region champion, defeating Delta in the finals to move on to the state dual championship in Columbus.

Nofzinger and Meyer won by decisions.