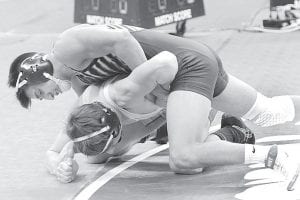 Zach Rocha works Collin Wiley of Caldwell into a possible near fall situation in the first round of consolations.

But the dream ended in heart- break when they were unable to secure top eight placements.

“The goal for each of the kids prior to districts was to just get to state,” said Brian Becher, AHS head coach.

“After qualifying, the goal changed to getting a placement.

Rocha squared off against Trent Duvall a 33-5 senior and the Northeast District champion from Rootstown.

Rocha had a hard time trying to find an opening to score. He got down 5-0 in the first period on a takedown and three near fall points. 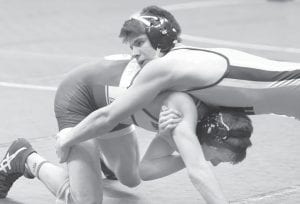 Brennan Short defends a shot attempt by Parker Watson of Rocky River Lutheran West in the second round of consolations.

Duvall chose the top position in the second and scored two more near fall points to end the period with a 7-0 lead.

In the final period, Rocha chose the neutral position and scored a takedown to close the gap to 7-2.

Needing to score big points to catch up, Rocha allowed an escape but gave up another take- down.

A late reversal by Rocha was all the scoring the senior could muster.

Chilson jumped on top quickly, scoring a takedown and two sets of two-point near fall points to grab a 6-0 lead.

Chilson scored an escape after choosing the down position in the second.

Trailing 7-0, Short took the top in the third, hoping to score some near fall points, but Chilson scored a reversal to open a 9- 0 lead. 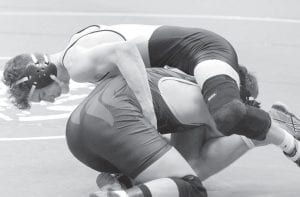 Kasyn Schaffner fights off a shot against Seth Henderson of Miami Valley Christian Academy in the championship preliminaries.

Schaffner took the mat against Miami Valley Christian Academy’s Seth Henderson, a 32- 3 senior who placed first in the Southwest District.

Henderson took a 3-0 lead on a penalty point for an illegal move and a takedown as the period ended.

Henderson chose down in the second and scored on a reversal for a 5-0 advantage.

Schaffner scored an escape, but Henderson scored another take- down and ended the second up 7-1.

Schaffner scored an escape after choosing down to start the third and scored another point on a penalty to trail 7-3.

The senior Streak could not close the gap and gave up another takedown to suffer the 9-3 loss. 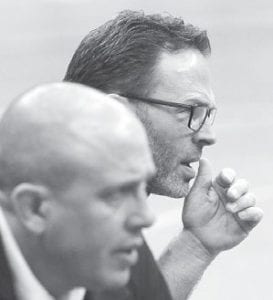 Brian Becher, AHS head coach, left, and Grant Burkholder, assistant coach, survey the action during a match at state. Burkholder retired after more than 30 years in the Archbold wrestling program.

It was a different mindset in the second round for the three Streaks wrestling in the consola- tion rounds.

A loss meant the season was over while a win meant living another day to compete.

Rocha, facing Collin Wiley of Caldwell, quickly scored the first takedown of the match, but Wiley scored an escape.

A scramble for a takedown put Rocha in a bad position, leading to Wiley scoring a takedown and three near fall points to lead 6-2 after the first period.

Wiley took the down position to start the second and scored an escape after giving up a penalty point to make the score 7-3.

Rocha managed a takedown before the period ended to cut the lead to 7-5.

In the final period, Rocha scored an escape after taking the down position and trailed 7-6.

Rocha scored a takedown with 20 seconds left and held Wiley down for the remainder, escaping with an 8-7 win to advance.

Sam Patterson of Batavia Clermont Northeast was Short’s oppo- nent in the first consolation round.

After a scoreless first period, Short managed an escape after going down to start the second, then scored a takedown and two near fall points for a 5-0 lead.

A locking hands penalty gave Patterson a point, but Short fin- ished the period up 5-1.

Patterson chose neutral in the third and scored a takedown, but Short scored a reversal and two more near fall points to lead 9-3.

After giving up an escape, Short scored one more takedown for the 11-4 decision.

Schaffner was hoping to make it a perfect three-for-three when he met Cody Albaugh of Bellaire in his first consolation match.

It took all of 59 seconds for Schaffner to advance after scor- ing a takedown and turning Albaugh to his back to get the pin with one second left in the period.

Seasons Come To An End

One more win would secure a top-eight placement, but for the Archbold trio, it was not to be.

After a scoreless first period, Rocha scored the only points of the second period when he scored an escape for a 1-0 lead.

In the third, Reeves tied the match with an escape, and the match ended at the end of regu- lation tied at 1.

A one-minute overtime was needed to decide the match. Reeves caught Rocha flat-footed and scored a takedown for the 3- 1 sudden victory win.

Short found himself in a tight match when he faced Parker Watson of Rocky River Lutheran West, a fourth-place finisher last season.

Parker scored quickly on a takedown, but Short scored an escape and trailed 2-1 after one.

Short took the down position but could not score in the second, and continued to trail going into the final period.

After giving up an escape to Watson to trail 4-2, Short worked to score a takedown to tie the match, but it was not to be. The AHS junior ended his season with a 4-2 defeat.

The final chance to have an Archbold place finisher was Schaffner, who faced Lewistown Indian Lake’s Hayden Pummel.

Pummel scored a pair of take- downs in the first period, allow- ing an escape to take a 4-1 lead.

The wrestlers stayed on their feet in the second, but Pummel scored another takedown and led 6-1.

In the final period, Pummel took the down position and scored a reversal for an 8-1 lead.

Schaffner scored a reversal late in the period, but gave up a point on an unsportsmanlike penalty for the 9-3 final.

Schaffner ends his season with a 28-13 record.

“All three guys wrestled tough in the second and third matches,” said Becher.

“The third round was heartwrenching, as all three were so close to becoming state placers, and then that goal was torn away in a matter of minutes.

“The seniors will be very dif- ficult to replace.”

What The Future Holds

It is the first time that a Blue Streak failed to reach the podium since the 2010 season.

Becher acknowledges the need for hard work and dedication to be successful.

“Hopefully between now and next November we have some kids commit to jumping some lev- els,” said Becher.

“We will have three returning district placers and a number of other district qualifiers, so hope- fully we have some underclass- men step up.

“It takes a lot of work to be a high placer, but we have many guys that could make that jump.

“Another big loss our team is taking is the retirement of Grant Burkholder (assistant coach).

“He has been coaching here for over 30 years. He is a very loyal guy.

“Hopefully we can keep him involved in some capacity.”