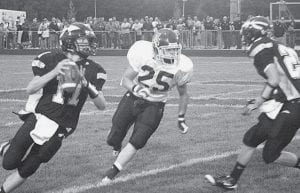 They have been known to have one of the most high-powered offenses in the area.

They have been known to score outlandish points in victory after victory.

Their quarterbacks have broken state-passing records year after year.

They racked up 500 yards on offense on Friday, Sept. 5 against Archbold.

But what the Fairview Apaches didn’t do was cross the goal line enough times to topple the Streaks from the ranks of the undefeated.

The Blue and Gold was looking to avenge three straight losses and slow down a starting quarterback that just set the state record for yards passed; senior James Elchinger passed for 779 yards in an 82-55 victory over Woodmore on Aug. 29.

But the Archbold defense had a bend-but-don’t-break attitude that led the Streaks to an 18-12 road victory.

"This was just a heck of a football game on both sides of the ball," said John Downey, AHS head coach. "Obviously it can come down to the last play, and who knows what is going to happen.

"I am proud of our kids. Both teams left it on the field. That was tremendous heart from both teams."

"We had a classic battle between two schools," said Robinson. "Every game in the past has been exactly like this one tonight.

"All the credit in the world to coach Downey and his program. As a first-year head coach and (to) coach against someone who has the class and integrity that coach Downey has, is an honor for me."

In a contest that kept fans on the edge of their seats right down to the final whistle, it came down to the closing seconds.

After a scoreless first quarter, Fairview scored in the first five seconds of the second when Elchinger connected with Ben Wonderly for a 10-yard touchdown pass.

The Apaches attempted a two-point conversion, but Elchinger’s run came up short for a 6-0 lead.

Sophomore Aaron Bontrager added the point-after-touchdown for a 7-6 lead that held up until the break.

The Apaches struck first in the second half on an Echlinger to-Wonderly 6-yard toss at the 7:46 mark. With another attempt at a two-point conversion failing, the Apaches had their game total of 12 points.

Following an exchange of possession, Fairview took a 9- play drive down to the Blue and Gold 18-yard line.

The Streaks once again bent but didn’t break, forcing the Apaches to turn the ball over on downs.

Two plays later, AHS took the lead. Rupp found David Dominique across the middle of the field; Dominique racked up 60 yards on the catch. Fidler then crossed the goal line on a 22-yard run.

Rupp ran the ball in on the two-point conversion try for a 15-12 advantage.

Fairview found itself battling not only the AHS defense, but also the yellow flag of the offi- cials. The Apaches were tagged with 15 penalties for 126 yards; but they were not the only ones. The Streaks got whistled for 12 penalties for 86 yards on an evening that was nothing less than eventful.

"We had some mixed up coverages and did some things incorrectly, but all in all we made a lot of tackles," said Downey. "It didn’t show, but we got a lot of pressure on the quarterback and caused a lot of those penalties inside because our guys were quicker."

Archbold added a field goal in the fourth for an 18-12 lead when Bontrager made a 37- yard field goal look like a chip shot.

But with five minutes to play, the arm and legs of Elchinger could not be counted out. Passing for 398 yards and running for 109, the Apaches had one more shot at the end zone.

"I am kicking myself for not kicking a field goal in the first quarter, and get points on the board and not give it away," said Downey. "Our special teams did a wonderful job; that was a big part of the game."

Down To The Wire

With 2:35 remaining and the Streaks with the ball, it appeared Archbold’s ground game could run the clock out. But after an 18-yard pickup, Fidler was nailed at midfield and coughed the ball up right into the black jerseys of the Apaches.

"We got a costly fumble", said Downey, "I know Jake’s heart would have been bleeding all season if we had lost this ball game, because he is a tremendous competitor. It was just an unfortunate fumble, but our defense was able to step up and save the day for him."

With good field position and plenty of time, Elchinger picked up 3 yards. But, again, the yellow flag was thrown and Fairview was hit with a 15-yard penalty. Elchinger connected with Wonderly for 5, then 8, yards while picking up 6 on a run.

Elchinger was thrown for a 1- yard loss, then found Wonderly for 2. The clock, not working in Fairview’s favor, was ticking down.

Facing a fourth-and-one with 17 seconds left, Elchinger went to the air. The ball fell helplessly to the ground, but laying on the ground was yet another yellow flag.

Pass interference was called on AHS. That would have given the Apaches a first down and another shot at the end zone.

But after an official discussion, it was ruled the ball was tipped; thus, no pass interference could be called.

Fairview turned the ball over on downs, securing the Blue and Gold win and a 3-0 start.