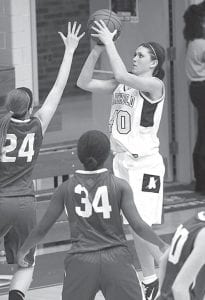 Abby Short (40) takes a jump shot in the finals of the Defiance Clinic Classic. Short, who scored 10 points in the contest, was named to the All-Tournament Team for her performance in the twoday tourney.

Archbold (7-0) won its first Defiance Clinic Classic title since 2003 with a 63-32 victory over Defiance, Tuesday, Dec. 13, at Defiance High School.

To get to the finals, the Streaks had to defeat fourtime defending champion Tinora in the semifinals, Monday, Dec. 12. The Streaks used a 13-2 first quarter to defeat the Rams 41-27, while Defiance advanced to the finals with a 37-32 victory over Ayersville. AHS 41, Tinora 27

“It’s nice getting into the Clinic Classic finals,” said Brian Ziegler, AHS head coach. “We didn’t play our best game, but good teams find a way to win when they aren’t at their best.

“I thought we had some good spurts throughout the game, but lacked consistency. Tinora’s defense had something to say about that.

“Our defense stepped up when we needed a stop. Darian Oberlin hit a huge threepointer at the end of the third quarter, which gave us momentum heading into the fourth.

Cassidy Wyse, who led the Streaks with 16 points against Tinora in the semifinals and 14 against the Bulldogs in the finals, was named tournament MVP.– photos by Mary Huber

“Cassidy Wyse was hot in the first half, and we did a good job finding her and getting her the ball.”

Wyse scored 12 of her game-leading 16 points in the first half, in which the Streaks led 21-11 at the half.

Haley Timmons was the only Ram in double figures, with 10 points.

In 2003– the last time AHS won the Clinic Classic– Ashley Ruffer put back a missed shot with time running out to beat Defiance 46-44.

The 2011 championship game was anything but close.

Archbold led 23-0 in the first quarter before Megan Sewell finally put Defiance on the scoreboard. The Bulldog sophomore made one of two foul shots with 41 seconds left.

Abby Short made one of two free throws to close out the quarter with AHS ahead 24-1.

The Bulldogs never got closer than 15 points in the second half as the Streaks won the title 63-32.

Wyse was named the tournament Most Valuable Player. Short was also named to the All-Tournament Team.

“The girls came out much more focused tonight,” said Ziegler. “The 24-1 first quarter was the big difference in winning the championship game.

“We forced turnovers and moved the ball much better against the zone tonight. We did a solid job finding openings in the zone, and we rebounded much better tonight, which got our fast break started.”

Archbold had four in double figures, and was led by Wyse with 14, including two treys.

Mindy Rupp scored 12, eight of which were in the first quarter.

Chelsea Goebel and Short each scored 10.

No Bulldog scored in double figures.