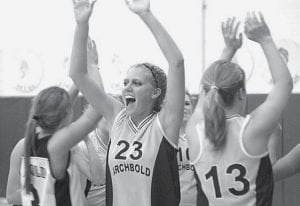 Archbold won its 19th Northwest Ohio Athletic League championship and its first since 2003, when it shared the title with the Vikings. The Streaks, ranked eighth in the Ohio High School Volleyball Coaches Association Division III poll, finished with an unblemished 8-0 record in the NWOAL.

Evergreen ended with a 7-1 record.

“We played a very good match,” said Julie Nofziger, AHS coach. “We were able to maintain our attack, and they struggled defensively against us.

“We passed very well, which allowed us to be successful offensively.”

“The girls were very motivated tonight, and had set the goal of a league championship very early in the season,” said Nofziger.

“They have kept that in mind and worked towards that goal all season long.”

Evergreen scored the first point in every game, but the Streaks came back and scored the second.

Emily Snyder ran a slide and spiked a hard kill to go up 6- 3. Winning points at 9-3 and 10-3 was Adi Lange as she hit back-to-back hard spikes. Dani Newman’s kill at 13-5 ignited the crowd.

Archbold’s front line of defense triple-blocked an Evergreen attack for a 17-9 lead. Snyder blocked a spike at 21- 10, and hit a kill to go up 22-10. Devin Newman scored game point with a kill.

Archbold raced to an 11-6 lead in the second game. Dani Newman smoked the ball at 16-11, bringing Archbold’s student section to its feet. She also scored kills for the next two points.

Lauren Kern and Snyder teamed up to block Evergreen at 21-14. Lange and Snyder scored game point with a block.

In the third game the score was tied at 6 and tied five more times, when AHS took a 14-13 lead.

Wyse spiked an overhead kill to raise the lead to 21-16. EHS closed the gap to 23-20 with an attack, but Dani Newman answered with a kill of her own for match point at 24-20.

Evergreen hit the ball out and AHS won the game and match, 25-20.

Dani Newman led AHS with 15 kills. Lange and Snyder had seven each.

“We had some difficulty with passing and setting against Liberty Center, which made our offense less effective,” said Nofziger.

“I was pleased that we were able to contain Kaitlin Rohrs the way we did by having our defense step it up. I was also pleased with our comeback in game two after trailing much of that game.”

Archbold’s serve reception was only 82 percent, as the Streaks passed 49 out of 60 serves to the setter.

Dani Newman, Lange and Snyder led the Streaks with 13, 11, and nine kills, respectively.

Saturday’s winners play each other in the district semifinal at Archbold, Tuesday, Oct. 23, 7 p.m.