AHS “We The People” Team Third In Ohio 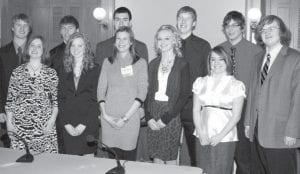 The Archbold High School advanced placement government class placed third in “We The People,” a competition that simulates a congressional hearing.

The competition is held at the Ohio Statehouse. It is sponsored by the Ohio Center for Law Related Education.

The statehouse was “a wonderful arena for this academic competition. The students compete in the actual hearing rooms used by our state representatives and senators,” Badenhop said.

Based on their textbooks, the students assume the roles as experts testifying during a mock congressional hearing. Categories included Understanding of the U.S. Constitution, constitutional application, reasoning, supporting evidence, responsiveness, and participation.

Topics ranged from historical and philosophical foundations of the American political system to challenges facing American constitutional democracy in the 21st century.

“This year’s team was diligent in their preparation. They used their comprehensive knowledge about the constitution and their expertise about current events to finish third among the best in the state,” Badenhop said.