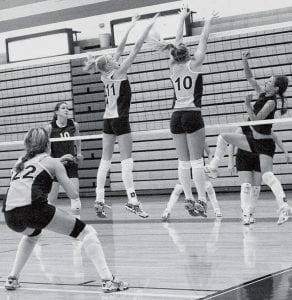 A spike meets the forearm of Emily Snyder (11) as she and Stacy Wyse (10) go up for a double-block in volleyball action, Saturday, Sept. 29. The Streaks are 19-1, 6-0 in the NWOAL with two regularseason games remaining.- photo by Scott Schultz

AHS and Evergreen are tied for the league lead at 6-0. The Streaks host the Vikings, Thursday, Oct. 11, in Archbold’s final regular-season game.

Archbold traveled to Start, Saturday, Oct. 6, to play a trimatch with Rossford.

After tying the score at 7, Delta went on a five-point run for a 12-7 lead that was stopped by a Lauren Kern kill.

AHS came back, and Dani Newman tied the score at 14 with a kill. After taking a 20-14 lead, Adi Lange ended the first game with a kill.

The Streaks started strong in the second game, taking a 6-3 lead. Delta tied the score at 9.

Emily Snyder and Lange teamed together for a crowdpleasing block for a 22-20 lead. Stacy Wyse served an ace to take the score to game point, 24-20. Snyder scored the gamewinning point as she spiked the ball down for a kill, 25-23.

Kern served an ace to start the third game. Delta scored the next point, but didn’t score again until the Panthers were down 10-2.

The closest the Panthers got after that was a five-point defi- cit.

Match point was won by AHS when Delta hit the ball out of bounds.

“This was a good league win for us,” said Julie Nofziger, AHS coach. “We knew their defense was going to bring everything back, but they struggled getting their offense going.

“We served aggressively tonight, which I believe played a big role for our win.”

“We were able to put a lot of nice things together,” said Nofziger. “Our hitting, serving and serve receive all were on for this match.”

“We were a little slow getting started against Start,” said Nofziger. “They attacked well the first game, and we weren’t able to get many good swings.

“In the second and third games we served more aggressively and played better defense.”