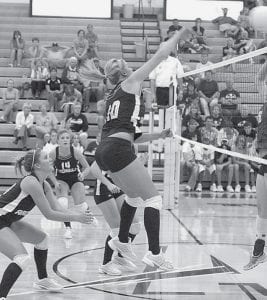 Stacy Wyse (10) pounds a spike over the net for the Blue Streaks. AHS hosts the Streak Spike-Tacular, Saturday, Sept. 27.- photo by Scott Schultz

After winning seven of its first eight matches this season, the Archbold volleyball team lost three of four last week and fell 8-4 on the season.

Hailey Galvan had seven kills; Emily Snyder and Alyssa Schaub each had five. Wyse and Newman each had four; Melinda Sauder had three.

Galvan had seven kills; Wyse and Snyder each had five. Snyder had two solo blocks; Schaub and Allan had 29 of the team’s 54 digs. Schaub had 15; Allan had 14.

The Streaks were 61/66 in serve reception.

Schaub had the team’s only solo block and had five kills, 10 digs, and served one ace. Wyse had seven kills and was 55/56 in setting. Newman and Galvan each had six kills. Allan had 11 digs and one save.

Lauren Kern served the team’s other ace, and had one kill and nine digs.

The Streaks got back on the winning track against Bellevue.

Snyder, Schaub, and Galvan each had solo blocks; Nofziger served three aces while Cowell and Schaub each had one.

Newman and Schaub had six kills each. Wyse had five; Snyder, four; Galvan, three; and Allan, one.