AHS Thespians Talk About Challenges, Including The Giggles, In Presenting The Comedy “Incognito” 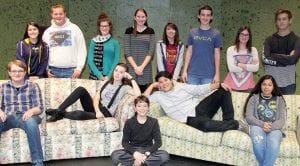 In presenting a theatrical performance, there are a wide variety of challenges those involved must face.

One challenge for the Archbold High School cast of the comedy “Incognito” is the giggles.

“That’s one of our problems, the giggles. We laugh too much at each other,” one girl said.

“You deliver a line, and even though it’s funny, you can’t laugh at it. You have to keep your composure,” one boy said.

In describing the show, William Nofziger, a freshman, starts out.

“The Berry family inherits an inn.”

Mackenna Whitacre, a senior, picks up the story.

“The mom and her four kids come to an old family inn, and they’re reopening it after it had been closed for a while,” she said.

“All these guests start to show up, but they’re in disguise. So everybody’s identity starts getting revealed. It’s a mystery-comedy.”

Is it a hard play to do?

“I think any kind of theatrical performance is hard,” said Colt Boyd, a senior.

He explained that working in a group, the actors have to adapt to each other, but eventually it all comes together.

Jeremiah Hartman, a junior, said, “I think it’s been definitely fun so far.”

But he added, “I agree with Colt. Sometimes we have our issues, but we ultimately look over them to put on a performance that can be greater and above what anyone thinks.”

There can be a difference of opinion on how to play a certain character.

Denilson Goana, a junior, said, “When it comes to certain characters, some people portray them differently than they are supposed to be played.”

And as long as it doesn’t disrupt the show, it’s allowed, he said.

When asked about difficult characters to play, Hartman spoke up.

His character is Dill Pickle.

“The whole thing with my character, is all he says is ‘yup’ and ‘nope.’”

Even though there are only two words, each must be delivered with the proper inflection and tone.

“But you sound the same all the time,” Goana said.

“Not all the time!” Hartman protested.

Erin Reichert, a freshman, plays Annabelle, the oldest of the four children. Her character differs from her own personality.

“My character is pretty much glued to her phone and attached to her boyfriend. I’m very bookish and don’t have a boyfriend,” she said.

“It’s been fun playing something that’s polar opposite.”

Nofziger said his character is the youngest of the children.

“My sister, who is approximately five years older than me, gets annoyed by me often. I’m more aggressive in my nagging in the play,” he said.

Members of the cast said the show uses a lot of word play for laughs, but there are a few moments of slapstick.

“I get hit over the head and pass out,” Goana said.

He said in one rehearsal, they were using a broom as a substitute for a hammer-like object called a cudgel. Hartman’s character hits Goana’s.

“Last time, he hit me in the head with the hard part of the broom. That hurt,” Goana said.

Lilly Delgado, a sophomore said one challenge they face, “a small challenge, is the pacing of the play, keeping things going. It’s a comedy, so you’ve got to keep it going quick.”

The solution, she said, is memorization.

“Knowing what you’re doing and where to be,” she said.

A few of the actors have a problem with memorization, “but by the time the play (goes on), we’ll have it,” said Olivia Mendez, a freshman.

“I think it’s gotten better in the last week.”

“I think memorization is a huge thing with that,” Boyd added.