Student Actors Describe Comedy As A Play- Within- A- Play 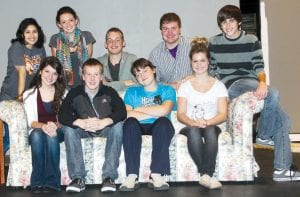 Members of the cast of the Archbold High School production of “Play On!” are, seated from left: Moriah Reichert, Gabe Short, Jacob Hartman, and Kinsey Smith. Standing: Moriah Rosales, Tressa Parsley, Caleb Wyse, Adam Steider, and Jay Miller. The show is about “a play within a play.”– photo by David Pugh

The Archbold High School theatre troop finds itself faced with a new set of challenges as its performs “Play On!”

A play within a play, it’s about “a community theater putting on a play that’s written by a local author who keeps changing the script,” said Caleb Wyse.

So “it’s a play about a play,” said Tressa Parsley.

The actors being portrayed are putting on what Miller calls a “stereotypical murder mystery.”

The show-within-theshow requires the actors to use British accents.

“Our British accents are bad, and they’re supposed to be bad, so it kind of doubles up on itself,” Miller said.

“There are so many scripted errors, when you mess up it’s funny. But once, I was supposed to mess up and I didn’t, and it was still funny,” Miller said.

But being bad on purpose can be a challenge. Moriah Reichert, said she has to memorize the delivery of lines three different ways.

“You have to say it right once, then say it wrong two different ways,” she said.

Wyse, Parsley, and Smith are seniors. Miller is a junior; Short and Reichert are sophomores.

Four of the student actors aren’t playing actors in the show. Wyse said he’s cast as the director of the play.

“I scream and yell, but I have to be believable,” he said.

Adam Steider, a senior, said this is the first time he’s played the antagonist in an AHS show.

“It’s difficult for me not to smile sometimes,” he said.

Jacob Hartman, a sophomore, said he doesn’t really have a defined character.

He plays a member of the stage crew.

Kent Vandock, director of vocal music at AHS, said there are things that may surprise the audience.

For example, when the curtain opens, the audience will not see a set or props. Instead, the view will be the back of the stage, where the theatre department stores things.

Wyse said actors aren’t confined to the stage; instead, they will, at times, walk through the audience.

In addition, Miller said, “The audience will feel uncomfortable with all of the mistakes.

“They’ll wonder if we’re actually making them, and it will draw them into the play.”

Vandock said if someone sees the show several times, it probably won’t be the same “because the unexpected is likely to occur,” he said.

Other cast members of “Play On!” are Moriah Rosales, a junior, and Julianne Sparks, a senior.

Parsley described the show as “a good laugh.

“I still laugh at parts, and I’ve seen it a million times.”