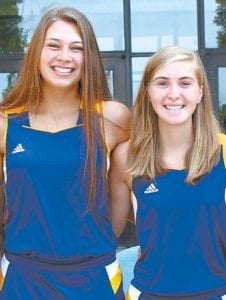 There were 35 singles players and 18 doubles teams.

In singles, Abbie Short defeated Rogers’ Sydni Bond 6-0, 6-0 in the first round, but lost to Napoleon’s fourthseeded Aliza Lankenau 6-1, 6-0 in the second round.

Maggie Henry was defeated by Napoleon’s Ali Roth 7- 5, 6-2 in the first round.

Sophie Schramm def. Rogers’ Desirae Blackmon 6-0, 6-0 in the first round, Maumee Valley Country Day’s Shereen Yassine 6-0, 6-0 in the second round, and Woodward’s Tia Crutchfield 6-0, 6-1 in the third round.

The doubles team of Elizabeth Mignin and Mya Stuckey defeated Woodward’s R. Trombly and C. Welles 6-1, 6- 1 in the first round, then lost to fourth-seeded Napoleon’s Maggie Weller and Addison Heitman 6-3, 6-2.

After a bye, the doubles team of Sara Lovejoy and Adriana Thompson was defeated by Toledo Central Catholic’s M. Mattimoe and G. Cowell 6-0, 6-0.

“We had a good year,” said Logan Wyse, AHS coach. “We had nine people earn a varsity letter this year, with five of them being sophomores.

“We had a lot of close matches and played some really good tennis.

“Our two seniors, Elizabeth Mignin and Sara Lovejoy, led our team this year and will be greatly missed.

“I saw many individuals progress this year in ability and leadership. It was a good season for Archbold tennis, and one that we can build on for next year.”

The Streaks finished the season with an 8-9 record.