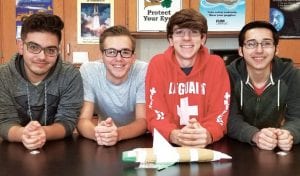 Trea Ponce, Noah Powers, Connor Hagans, and Mario Estrada, AHS seniors, from left, won an engineering competition involving rockets powered by air pressure. Their rocket, “The Baked Potato,” in the foreground, was not the best-appearing rocket in the competition, but flew well enough to win.– photo by David Pugh

A team of Archbold High School seniors topped competitors from across northwest Ohio and southeast Michigan to win the University of Toledo Engineering Competition, Friday, Dec. 8.

At first, the AHS seniors thought there was no way they were going to win, so they left for lunch.

For the last 14 years, the UT College of Engineering has hosted the competition. It involves a design challenge, which is not revealed until the competitors arrive.

An empty water bottle is attached to one end of a plastic pipe. The rocket is placed on the other end of the pipe.

Competitors stomp on the empty bottle, and their rocket is propelled.

Scores are determined by multiplying the mass of the rocket by the distance it traveled, measured in zones 1 through 50.

Going past Zone 50 is automatic disqualification.

The scoring system– multiplying mass times distance– means a heavy rocket, with more mass, flying a shorter distance may score just as much as a lighter rocket, with less mass, traveling farther.

The winning team was made up of Trea Ponce, Connor Hagans, Mario Estrada, and Noah Powers.

“Our (design) philosophy going in was to make it (the rocket) huge and try to get it quite a ways, because we knew we weren’t going to get to the end zones,” Hagans said.

A heavy rocket would also avoid the possibility of going past the end zone.

“We went with the safe bet,” he said.

The payload was paperclips.

Powers said, “Basically, we started off with a tube and a cone, and then we basically started wrapping stuff around it.”

It would not have won a best design award.

“We called it ‘The Baked Potato’ because the paper bag was wrapped around the outside.

“It was an ugly rocket, but it did the job.”

Their early test flights proved they were too heavy at 125 grams.

They removed 20 grams, “but it went just as far,” Estrada said.

During their test flights, they discovered that just stomping on the water bottle with one foot wasn’t enough.

So they decided to actually jump on the bottle with both feet.

That delivered maximum launch pressure– and destroyed a practice bottle.

In competition, a team from Whitmer High School, Toledo, got its rocket out to Zone 50.

For their competition flight, Estrada jumped into the air, landed on the water bottle with both feet, and The Baked Potato flew to Zone 14.

“And we were like, ‘Well, we didn’t win,’ so we went to get our lunch and left the auditorium,” Hagans said.

At the end of the competition, all teams were in the room when the announcer read the fourth-place score.

“So we automatically knew we got top 3, and we’re like so surprised, and then they kept going up, and we thought, ‘oh, top 2!’ Then like, oh my gosh, we got first place!”

“It was so funny,” Hagans said, “Everyone else’s rocket actually looked like a rocket. Ours was so bad looking, and we won by so much.”

“I thought there was no way we were going to win,” Ponce said.