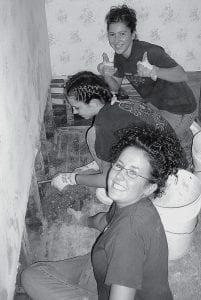 A total of 36 Archbold High School students traveled to Ottawa, Friday, Aug. 31 to assist flood victims. Many of the students were given the task of removing water-soaked wallboard from interior walls. Working on that task, from top to bottom are Sara Davis, Dani Weigand, and Chelsea Giesige, AHS seniors.- courtesy photo

Students from Archbold High School carried on the community’s longstanding tradition of volunteerism and service to others by assisting flood victims in Ottawa, Friday, Aug. 31.

After heavy rains hit Northwest Ohio, the Blanchard River, which runs through Ottawa, began to rise. During the nights of Tuesday, Aug. 21- Wednesday, Aug. 22, the community was inundated.

Amy Laibe, and her husband, Sam, who live on Ottawa’s west end, had already given up hopes of repairing their home, concentrating instead on trying to save that of her mother-in-law.

On Friday, Aug. 31, they were contemplating all the work that had to be done; wallboard stripped two to three feet from the floor, carpeting and flooring removed, etc.

“All of the sudden, here comes an Archbold school bus down the street,” she said.

Laibe said they saw students get off the bus and go to neighboring residences. When they asked, three AHS girls were detailed to help.

“They worked all morning. They didn’t talk; they were focused on the work. They were on a mission to get it done,” she said.

When the girls broke for lunch, Laibe said they thanked them for their help, but one of the girls said, “You haven’t seen the last of us. We’ll be back.”

And they were; by the time the 36 AHS students left about 4:30 pm, upwards of 20 students were working in the house.

“It was wonderful. They didn’t complain, they didn’t talk; they were totally focused. I can’t say enough.

“They got us to where we needed to be,” she said.

Tim Meister, AHS principal, said initially the trip was opened to vocational agriculture and industrial arts students; but when word came back as many students as possible were needed, the opportunity was offered to the senior class.

It wouldn’t be a day to goof off from school, Meister said; the students would still be responsible for their schoolwork.

With Linda Schmidt, Archbold School District bus driver, volunteering to drive a bus to Ottawa, Link and the 36 students were ready to go on Friday.

Maria Strawn, AHS senior, said as they drove towards Ottawa, they could see signs of flooding.

Once they got into town, “Tons of shops were closed, and there were piles and piles of furniture on the curb, waiting to be taken away.”

When they arrived, Link said they were excited to get going, but they overwhelmed the Red Cross system.

“When we showed up with a busload of kids, it took them a while to get their assigned jobs. The kids were anxious to get started,” Link said.

“I don’t think anything happened the first hour,” said Tyler Bernath, another senior on the trip.

When they did get their assignments, the work varied from mopping floors to ripping out wallboard, carpet, and linoleum.

“It wasn’t really hard, but there was a lot of work,” he said.

“The guys were like, ‘great, we get to attack a wall,'” Strawn said.

Strawn and Bernath said at one point, two AHS students, Lucas Cameron and Tyler Short, were stripping cabinets out of a kitchen.

“They were told the water was off, but it wasn’t,” Strawn said.

Cameron and Short broke a waterline, and they were doused, head to toe.

The two were taken to a place where they could get a shower and dry clothes.

The people of Ottawa were glad to get help, the seniors said.

“It had been, like, a week, but they were so relieved to have us there,” Strawn said.

“You could tell they (Ottawa residents) were sad. You could hear it in their voices. There wasn’t any enthusiasm when we first got there.

“But when they could see what we could do, it picked up,” Bernath said.

At the end of the day, the students were worn out, “but in a good way,” Strawn said.

She said one of the other girls on the trip said she had “never been so grateful for my house before.”

“That says it all. We were so grateful it didn’t happen to us.”

Bernath and Strawn said the trip taught them lessons about teamwork, and gave them pride and a sense of accomplishment.

“We walked in there like, ‘We’re here to save the day.’ That’s a cool feeling,” she said.

“It’s like, six hours and you can make such a difference,” she said.

Meister said he has “always been such a huge believer that so many things in education can and should occur outside the classroom.”

Among the lessons Meister said the trip taught was, “never believe bad things won’t happen to you.”

He said the trip goes along with the AHS motto for the year: “Act with class, preserve with passion, refuse to fail.”

“That’s the kind of kids we have here,” he said.

Those making the trip were: