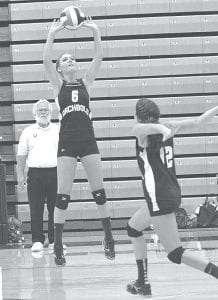 The Streaks jumped out to a 16-4 lead in the first game before the Tigers closed the gap to 18-10. AHS scored four straight points for a 22-10 lead when LC called a time-out.

A Becca Gerig back row spike gave the Streaks a 21- 13 advantage, and LC called for a time-out. The Tigers scored their final point when an AHS spike went out of bounds, and Archbold scored four straight points for a 25- 14 victory.

The score was tied at 17 in the third game when the Streaks scored three straight points for a 20-17 advantage. Archbold raised the gap to 23-18 before some unforced errors by the Streaks enabled the Tigers to get within one, 23-22.

A Gerig kill and a spike into the net by LC’s Niki Meyer gave AHS the 25-22 victory.

Gerig and Jenny Lehman led the Streak attack with 15 kills each. Darian Oberlin had seven; as a team, AHS had 43 kills.