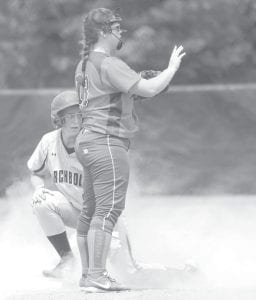 Left: Andi Peterson is safe at third base after hitting a triple in the third inning of Archbold’s regional final with Edison, Saturday, May 28, at Bellefontaine. The Streaks were unable to

The Archbold softball team (19-6) routed Paulding in the Division III regional semifinals 12-1 before falling to Milan Edison 2-1 in the regional championship game.

The Streaks pounded Paulding 12-1, Wednesday, May 25, at Findlay as the offense was in high gear.

Archbold answered with four runs in the bottom of the inning.

Alyssa Ziegler had a runbatted in double while Madison Kohler and Macey Rupp had RBI singles.

AHS completely broke the game open with eight runs in the second. Ziegler had two hits in the inning and drove in two more runs while Cassi Wyse, Payton Robinson, Shelby Cline, and Andi Peterson all had RBI singles.

Ziegler led the way at the plate, going 3-3 with 3 RBIs, while Wyse, Rupp, and Peyton Dickman each had two hits. 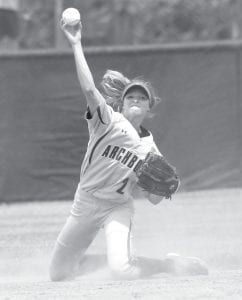 bring the freshman home, however. Right: Macey Rupp stops a grounder and throws to first for the second out of the fifth inning.– photos by Mary Huber

“We came out and really put pressure on them offensively,” said Joe Frank, AHS head coach.

“We executed the bunt game really well and also swung the bats, as well. It was an awesome display of hitting.”

The Streaks met Edison (24-3), Saturday, May 28, at Bellefontaine in a matchup of teams that both lost in the regional finals last year (Edison played in Div. II in 2015).

The Chargers jumped out to a quick 2-0 lead after their first at-bat with a walk, base hit, and an error, loading the bases.

The Streaks got a double play on a pop-up, but Edison countered with a single to drive in both runs.

Archbold had a chance to cut into the lead after Peterson’s leadoff triple in the bottom of the third. A strikeout, pop-up, and another strike-out stranded Peterson at third. 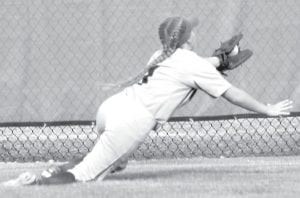 Brooke Hines makes a diving catch in center field in the fifth inning of Archbold’s regional semifinal with Paulding.– photo by Mary Huber

The Streaks finally got to Edison in the bottom of the sixth with a two-out rally.

Wyse singled and Robinson doubled to drive in Wyse and cut the deficit to 2-1.

The Streaks went down in order in the seventh inning.

Robinson pitched “brilliantly” after the first inning, said Frank, facing only one batter over the minimum the last six innings.

“It is always tough to get knocked out of the tourney, but we left it on the field,” said Frank.

“We were, in my opinion, a little tight in the first inning, and they made us pay.

“I think they only hit two or three balls out of the infield the entire game, but their pitcher was very good and limited our opportunities, as well.

“It is really tough to say goodbye to our six seniors– Cassi Wyse, Payton Robinson, Madison Kohler, Shelby Cline, Brooke Hines, and Neila Kinsman. They all played their roles and contributed so much to the success of this team. 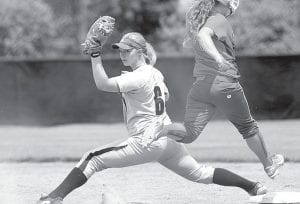 Edison’s Peyton Michel is out at first base after Cassi Wyse caught the throw from third baseman Shelby Cline.– photo by Mary Huber

“I wish them the absolute best in all of their future endeavors.

“This was a fantastic season that fell just short of the state tourney.

“I am very proud to be able to coach a great team and, more importantly, a great group of young ladies. Well done.”