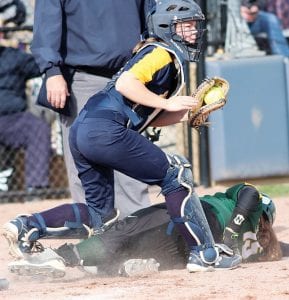 Archbold withstood several challenges as the Streaks defeated Evergreen 8-4, Friday, May 10, in a Division III sectional final at Archbold.

The Vikings (18-6) left a number of runners on base and committed five errors in the contest as they were unable to catch up to the Blue Streaks.

Archbold opened the bottom of the first inning with four runs. Gabby Nafziger started the game with a double, then advanced to third on an EHS error when Kylie Sauder was at the plate.

Madison Roth loaded the bases after getting hit by a pitch.

Bralynn Blanton brought Nafziger and Sauder home with a double for a 2-0 lead.

Faith Wyse walked, and with the bases loaded again Alyssa McCoy hit a single to right field, scoring Roth for a 3-0 lead.

Alexa Wilson’s infield single then scored Blanton for a 4-0 advantage.

Evergreen scored three runs on three hits and one Archbold error in the fourth to tighten the deficit to 4-3.

The Streaks answered with a run in the bottom of the fourth and one in the fifth to go up 6-3.

After AHS stopped Evergreen from scoring in the top of the sixth, the Streaks scored two more runs for an 8-3 advantage.

The Vikings scored on a double in the seventh, but the final hit flew straight to Sauder for the final out.

Archbold had nine hits. Nafziger recorded two doubles; Roth, a double and a single; Blanton, a double; Sauder, Wyse, McCoy, and Grace Mayer, each a single.

Down 2-1 going into the bottom of the second inning, Archbold scored four runs to lead 5-2.

The Streaks added a run in the fifth for a 6-2 lead.

The Knights scored twice in the top of the seventh to close the gap to 6-4, but couldn’t push across the tying runs.

Blanton got the win on the mound. In seven innings she allowed four runs on 11 hits, struck out six and walked none.

The Streaks had seven hits. Schramm had a double; Mayer had two base hits. Nafziger, Sauder, Blanton, and Wilson each had a single.

The Streaks and Eagles play in the district championship game, tomorrow, Thursday, 5 pm, at Maumee.