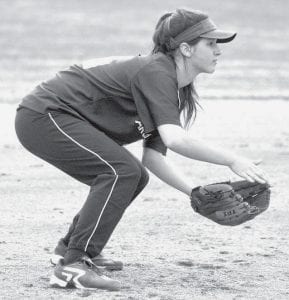 The victories pushed the Streaks’ record to 10-5, 3-0 in the Northwest Ohio Athletic League.

The Streaks jumped out to a 4-0 lead in the first inning, keyed by Dani Newman’s tworun single. AHS struck for five more in the second and went on to an easy victory.

Stacy Wyse, who earlier tripled off the top of the fence, left no doubt on her next trip to the plate, homering over the leftfield fence to drive in three of her four runs batted in. Lauren Kern backed up Wyse with two hits.

The Streaks totaled 10 hits while Kern was dominant on the mound, giving up only a single in the fifth inning while striking out eight.

“We played a solid game,” said Joe Frank, AHS coach. “We had six players get hits today, and that means we are getting good swings throughout the lineup.

“We are starting to put things together at the right time of the season.”

AHS broke the game open with an eight-run second inning. Kern and Adi Lange each had two-run singles in the second. Andrea Allan led the Streaks at the plate, going 2/3 with two triples and 2 RBIs. Lange also had two hits as AHS collected 10 in the contest.

Kern and Lex Campos each pitched three innings for a combined shutout. Kern struck out five and Campos, three, while each one gave up one hit.

“We had a big second inning and took advantage of three walks in the inning,” said Frank. “Good teams take advantage when given the opportunity, and we certainly did that today.

“Our pitching and defense may not draw headlines like offense does, but we are starting to put together a pretty good combination of the three areas.”

The Streaks had a 1-0 lead when Newman hit a three-run homer. AHS put the game away by adding four more runs in the third with a two-run double by Morgan Ducey highlighting the inning.

Ducey finished off a perfect 3/3 day at the plate by blasting a two-run homer in the fourth. Wyse backed Ducey’s big day with two hits, including a double. AHS pounded out 10 hits in the five-inning contest.

Campos was dominant on the mound as she picked up the win. She pitched a one-hit shutout as she struck out seven and walked one.

“It was good to see Lex (Campos) throw well again today,” said Frank. “She is picking up some confidence, and we know we’ve got a quality backup to Lauren (Kern) on the mound.

“It was also good to see Morgan (Ducey) have a huge day at the plate. It is bound to give her more confidence as the season goes on.”

Kern pitched a one-hit shutout to lead AHS past the Bears in an NWOAL contest.

The game was a pitcher’s duel between Kern and Ashley Ebaugh. Both had shutouts headed into the seventh inning.

Wyse singled to lead off the inning, and Alyssa Schaub pinch ran for her. Newman laid down a sacrifice bunt to advance Schaub to second with one out. With two outs, Ducey came through with a clutch single to break the deadlock.

The Streaks expanded their lead to 2-0 after a walk and an error by the Bears. Kern broke the game wide open with a tworun triple and scored on a wild pitch to up the score to 5-0.

Kern struck out 11 and walked three.

“We had to fight hard to win against a good Bryan squad today,” said Frank. “We have lost some tough games this year, and it is important for us to win some games like this one to build our confidence.

“This was a huge win in the NWOAL for us.”

AHS beat a strong Fairview team as Andrea Allan hit a leadoff double in the bottom of the first and scored on a double steal.

The Streaks scored three more runs in the second to lead 4-0. Lange led off with a walk, stole second, and scored on a double by Ducey. Abbey Graber then singled in Ducey. The last Streak run in the second scored on an error by the Apaches.

AHS scored twice more in the fifth on a hit batter, an S. Wyse single, and another Apache error.

The Apache runs came on a three-run homer off the bat of Brigitte Eicher.

Kern struck out a season-high 16 batters while tossing a threehitter. The homer snapped a string of four straight shutouts by Kern and Lex Campos.

Wyse led the way at the plate, going 3-4, while Graber, Allan, and Kern each had two hits.

“This caps off a tremendous week for our team,” said Frank. “We played very well all five games this week. We had one error in our five games combined, and that is tremendous.

“Lauren (Kern) and Lex (Campos) pitched four shutouts, so it was a great week for them as well. We hit the ball well in four of the five games, and that was very encouraging.

“We have a huge week coming up with Montpelier on Monday, undefeated and fifth-ranked Elmwood on Tuesday, and an NWOAL showdown with Evergreen on Thursday. Hopefully, we continue to make progress in all areas of the game as the regular season winds down and we head into tournament play.”