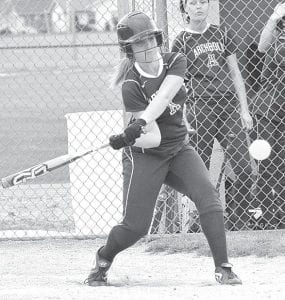 The Streaks beat Swanton 20-0, were rained out in the bottom of the fourth leading Stryker 10-0, defeated Patrick Henry 7-1, and swept Elmwood in a doubleheader 10-4 and 11-7.

Hanna Allison pitched a no-hitter while striking out seven and walking one.

Jesse Fidler led the way at the plate, going 4-5 with a single, double, and two home runs while driving in eight runs.

The Streaks scored in all five innings in collecting 20 hits. 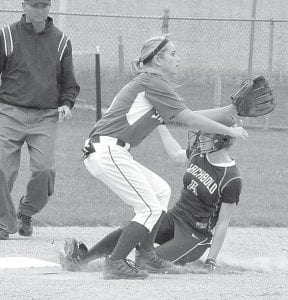 The Streaks built a 4-0 lead after two innings and went on to a 7-1 victory over the Patriots, Friday, April 26, at Archbold.

Fidler and Gerken each drove in runs with base hits.

Allison shut the door on the Patriots the rest of the way. She pitched a five-hitter while striking out nine and walking one.

The Streaks trailed Elmwood 4-3 in the sixth inning, Saturday, April 27, at Elmwood, when Fidler hit a tworun homer to put the Streaks ahead for good.

Beck, Wyse, and Fidler each had two hits to lead the Streaks at the plate. Wyse and Fidler drove in four runs each.

Allison was the winning pitcher, giving up four runs on nine hits, striking out eight, and walking two.

“This was a very good win against a good Elmwood team that had us down in the sixth inning before we rallied for seven runs,” said Joe Frank, AHS head coach.

“We have a lot of confi- dence that we can come from behind now that we have done it a couple of times.”

Trailing 7-1 after two innings in the second game, the Streaks made a huge comeback and swept the Royals in doubleheader action 11-7.

Payton Robinson was the winning pitcher, shutting out the Royals the last five innings.

Archbold turned three 6- 4-3 double plays in the contest to shut down a couple of Elmwood rallies.

AHS narrowed the deficit to 7-6 with a four-run fourth featuring a Beck triple, which drove in two runs.

Gerig doubled home Beck and then scored on a runbatted in single by Wyse.

AHS took control in the fifth by scoring five runs, all with two outs.

Gerken, who had singled earlier in the inning, scored on an error. Gerig hit her third double of the game and scored Beck.

Wyse then singled home Gerig, and Allison followed with a two-run homer.

The Streaks pounded out 14 hits, Gerig led the way with four. Allison was 3-4 with four RBIs to aid the attack.

“What a game to finish up the day and the week,” said Frank.

“Being down 7-1 after two innings was not what we planned on, but it happened. We didn’t put our heads down and feel sorry for ourselves, but instead fought harder.

“Payton (Robinson) really battled out there to give us a chance by shutting them down the last five innings. I can’t say enough about our character in fighting back the way we did.

“Although we made some errors, we also turned three double plays in the game. All three were balls hit to Becca (Gerig), who threw to Cassidy Williams at second base. Cass then completed each of the double plays with strong throws to first.

“I have never seen three double plays in a game before, so that was special.

“We have a lot going for us, but we have to continue to improve. We can get better in all phases of the game, and that is our goal.”