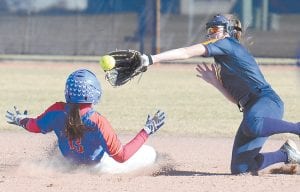 The throw to Kylie Sauder isn’t in time and the Liberty-Benton runner steals second base in their season opener, Monday, March 25. The Blue Streaks are undefeated after the first week of the season.– photo by Mario Gomez

The Archbold softball team is 4-0 after the first week of the 2019 season, outscoring its opponents 28-8 in the first four games, which were all non-league contests.

Down 6-5 going into the bottom of the seventh inning, the Streaks scored twice to win 7-6, Tuesday, March 26, at Memorial Park.

Andee Grime recorded the win on the mound. In four innings she allowed six runs on seven hits, struck out two, and walked two.

The Streaks traveled to Defiance (0-3), Thursday, March 28, and scored four runs in the second inning to come home with a 4-1 victory.

Chloe Schramm was the winning pitcher. In seven innings she allowed one run on five hits, struck out four, and walked two.

AHS had six hits. Wilson had a double and a single; Nafziger and Emma Hall each had two singles.

Schramm was the winning pitcher. In seven innings she allowed no runs on five hits, struck out eight, and walked two.

Each team had five hits. Nafziger and Sauder each had two base hits, while Reagan Kohler had one.