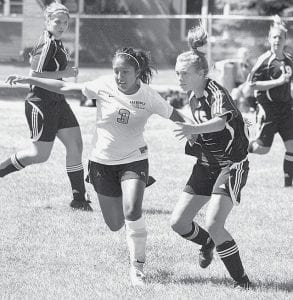 The Archbold soccer team improved its record to 9-2-1 with victories over Continental and Kalida last week.

After tying the Pirates last year, Archbold was on a mission to prove it was a force to be reckoned with this year.

The Pirates scored the game’s first goal. Jessica Ramirez scored for AHS to tie the game at 1. Alicia Drewes penetrated the field, then hit a sharp pass to Ramirez, who finished the play, giving the Streaks a 2-1 lead.

Continental added another goal to tie the score at 2. Assisted by Drewes, Ramirez scored her third goal of the game, and at the half, Archbold was ahead 3-2.

Continental was held score- less by the Streaks’ dynamic defensive line in the second half. The newest members of the defensive line are Mindy Rupp and Trisha King.

Already having a hat trick, Ramirez added a fourth goal for a 4-2 win.

Putnam County teams seem to always give the Streaks a run for the money.

The Streaks tied Kalida last year in a very tactical and physical game. Those attributes also held true this year.

King finished a rebound off a corner kick to give AHS a 1- 0 lead. Kalida soon answered with a goal of its own to tie the game at 1.

With only eight minutes left in the first half, Drewes penetrated the field and launched a bullet to the goal for a 2-1 lead.

Kalida made several attempts on goal in the second half, which were denied by Beck, the goalie. Drewes crossed the ball, which went off of Ramirez’s head to Sierra Nofziger, who finished the ball into the back of the net for a 3-1 victory.