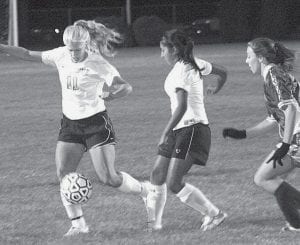 They controlled the field and put many great combinations together.

The Streaks’ tactical side of the game held Waite scoreless. Jessica Ramirez, Rupp, Kelsey Moshier, and Alicia Drewes each had two goals. R. Beck had one.

With three assists under her belt, Drewes added a fourth with a corner kick to Jenni Beck. Drewes launched a perfect ball in the air to J. Beck, who leaped into the air from the 18-yard line to blast a bullet to the back of the net.

The Streaks took an early lead. Delta’s goalie took a goal kick, which Drewes knocked down and put in the corner of the goal.

The Panthers answered with a quick goal to tie the game. A Drewes assist to Autumn Lantz gave Archbold a 2-1 lead at the half.

The second half was complete domination of the field by the Streaks. Nofziger assisted Ramirez, giving Archbold a 3-1 lead. Ramirez assisted Ducey, who headed the ball into the net to increase the lead to 4-1.