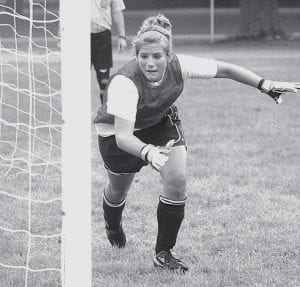 Jenni Beck scrambles to defend the Blue Streak goal. Archbold upped its soccer record to 4-0-1 with a victory over Otsego last week.- photo by Scott Schultz

The Archbold soccer team upped its record to 4-0-1 with a 4-0 victory at Otsego Saturday, Sept. 8.

Alicia Drewes, freshman, scored fast in the first half for a 1-0 lead. After several minutes of tough play, Jessica Ramirez, a sophomore, scored with the assist of Drewes, making the score 2-0.

Jenni Beck, Archbold goalkeeper, and the defense of Amanda Graber, Nicole Babcock and Hannah Leininger kept the Knights off the Streak half of the field.

Midway through the first half, Bri Wyse, a senior, dribbled the ball down the field with an assist from Drewes, upping the lead to 3-0. Kelsey Moshier, a freshman, scored for a 4-0 halftime lead.

Neither team scored in the second half, but the Streaks had many shots on goal.