AHS Seniors Have Fun Getting It Done 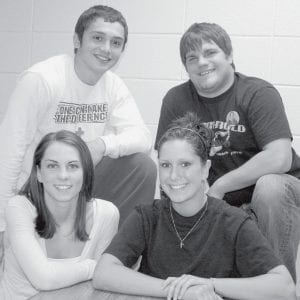 These four Archbold High School seniors talked about memories of their school years in Archbold, and their classmates, during a recent interview. Front row, from left: Dani Weigand and Kara Goldsmith. Back row: Colton Martinez and Jacob Yoder. – photo by David Pugh

All classes of students have reputations when they arrive at Archbold High School.

“Every class, every teacher was like, ‘Oh, I was so worried about you guys, because I heard so many bad things, but you guys aren’t that bad,'” said Dani Weigand.

She said the class would probably be remembered for their “crazy, fun randomness. We’re never serious. I can’t remember a time when all of us were serious,” she said.

But Jacob Yoder quickly added, “But we get it done. We all have good scores and stuff like that.”

Their bad reputation may have started as far back as kindergarten. Colton Martinez said on the school bus, a boy threw a fake punch at him. The student missed Martinez, but then struck another boy in the face.

“He wasn’t injured, but there were definitely tears,” Martinez said.

In elementary school, Martinez said he was framed for using a bad word by another class member and got detention for an offense he had not committed.

“I ripped up the detention slip and hid in my teacher’s room,” he said.

When the teacher returned to class, she found him hiding by the trash can.

He still had to serve the detention.

By middle school, there were still some inappropriate behaviors.

At the lunch tables, class members would rip one end off the paper covers of straws, then blow into the straw, shooting the paper wrapper some distance.

“The wrappers were all over,” Yoder said.

As a result, students couldn’t leave their tables after lunch.

“You had to be silent. You couldn’t talk,” Weigand said.

Then there was an incident during an assembly at Archbold Middle School.

Martinez recalls that as the speaker was talking, “It was so boring… it was almost like he was done, and we got up and started applauding.”

The problem- it wasn’t the end of the speech.

“We got scolded for that,” Martinez said. There were more high jinks in high school.

“It was pouring down rain. It was all muddy, and the guys are all muddy. All of us cheerleaders were all muddy, so at the end of the game, we said, like, ‘forget this,’ so we went out to slide on the field.

“The bus drivers were so mad… they didn’t want mud on the bus.

Then there was the “epic English class.”

For two days, Martinez said he and another student cooked up a plan whereby one would call the school office from their cellular phone and get himself out of class.

So the other student went ahead with his plan. He crawled under a table, during a lesson, and proceeded to make the call. Unfortunately for him, the high school office staff realized who was on the other end of the line.

While the other seniors had attended Archbold schools since kindergarten, Kara Goldsmith is an open enrollment student from Wauseon.

“Everyone here just seems to get along, and everybody is really nice. They don’t fit the Archbold stereotype, where they say Archbold is stuck up.”

The stereotype that Archbold students believe they are better than everyone else exists, “but it’s not true,” Goldsmith said.

“For sports, I think we’re all cocky,” Weigand said.

Based on Archbold’s past success, “we have a reason to be” cocky, Weigand said.

Did Goldsmith suffer a lot of grief, being a former Indian in Blue Streak country?

“More from Wauseon people. They gave me a lot of grief, but not really so much from Archbold people. They were more open to it, and I had a lot of friends here to begin with.”

Archbold students welcomed her “right off the bat, on the first day. It was probably one of the best decisions I’ve made,” she said.

“I think everybody in the community wants the students to succeed and do their best,” Goldsmith said, adding, “If there’s ever a benefit or a fund-raiser, the whole town is there.”

Martinez said there’s a high expectation for basketball teams, “because we usually do well. I think the town expects us to go really far in tournament every year. We all know there are high expectations.

“It’s good for us. We’re known as a basketball town. You start working in, like, second grade, and you’re on teams in fourth grade. All the way up to your senior year, you play with the same guys. You know what you want to get your senior year- you want to go to state. That’s what the town wants.”

Archbold crowds follow the team to every away game.

“When you step on the court, you know they’re there to back you up. It’s a good feeling, to know the whole town is there watching you,” Martinez said.

“We’re grateful for all the activities and classes we have to choose from. The property tax levy that was just passed; it was the community that did that,” Yoder said.

“Our teachers will go out of their way to help,” Weigand said.

“They take an interest in your life beyond the school aspect,” she said.