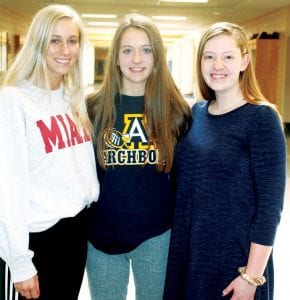 Juniors Lauren Coressel, Chloe Nofziger, and Riah Short, from left, put together a plan to bring self-defense classes to Archbold High School. The classes are taught by KOGS, or Keeping Our Girls Safe, a group formed in reaction to the abduction and murder of a Metamora woman in 2016.– photo by David Pugh

Out of the fear that held Fulton County in its grip, Keeping Our Girls Safe or KOGS, was born.

Sierah Joughin, a 20-yearold college student and Evergreen High School graduate, disappeared in 2016. Days later, her body was found in a makeshift grave in a field.

She had been murdered.

Three Archbold High School juniors– Lauren Coressel, Riah Short and Chloe Nofziger– thought the KOGS classes were so important, they spearheaded an effort to bring them to AHS as part of Project Citizen.

In a survey the girls sent to female classmates, more than half came back saying that they had been in “uncomfortable situations” at least once. Places of discomfort included the Fulton County Fair, a large discount store, and shopping malls.

“Project Citizen is an idea where you (students) come up with a public policy that you would like to implement in your community,” said Andrea Oyer, AHS government teacher. “This was their public policy.

“The final step of that is the action plan, where you lay out some ideas for how you would like to see it implemented.

“Since then, they have asked that I take over the planning and implementing of it in Senior Seminar.”

“My volleyball team last year participated in a self-defense class that Keeping Our Girls Safe held here at the high school,” Coressel said.

“I thought it was very beneficial, especially since it was around fair time.

“We really came up with the idea when we were talking about it and throwing ideas off each other. We were like, ‘What would benefit people for a long amount of time and not just this year or next year?’

“We thought a self-defense class would be very beneficial to everybody.”

The class was offered Friday, May 3, in the afternoon, to all senior girls, including those who attend Four County Career Center.

“It’s not mandatory for any of the girls,” said Oyer. “That has to be a decision they and their family make.”

The class is split into two sessions.

“The first hour is just going to be them (KOGS instructors) talking to us about the legalities of self-defense. They’re not going to get into the moves until the second hour,” Coressel said.

Then, “they’re going to teach us moves on how to defend ourselves, and even before that, what to say to somebody who is approaching us, and when we feel uncomfortable with things, to say NO firmly.”

KOGS offers its classes for free thanks to a big fundraiser that covers the costs, Nofziger said.

“In July they will do ‘Keeping Our Girls Safe,’” Mrs. Oyer said.

“It’s a (motorcycle) ride. Last year they had almost a thousand participants.

“All the funds raised there are used to go out into the surrounding community to provide this class, free of charge.”

Oyer said she met with Kolasinski.

“He came to school and met with the group and myself, and told us that ideally, that’s what they would like to do– get into all of the schools and have the opportunity to teach girls about defending themselves and how to verbally be prepared,” Oyer said.

“We’re the first school that has brought them in the actual school during the school day.

“I know Evergreen, clearly, has done some classes in the community, but we’re doing it during the school day.”

“We know that our community is very safe,” Nofziger said.

“We saw that other people weren’t super-educated on this topic. We knew it was a problem, and we wanted to reach out.”

“We knew that a lot of people think Archbold’s really sheltered,” Short said.

“They think that nothing can happen here, but if something would happen, people aren’t really prepared in our community, especially girls going off to college. We saw that as a really big problem.

“We knew that with them going off to college, they needed to know that they were going to be opened to a wider world than just our little Archbold here.

“We wanted to address that.”