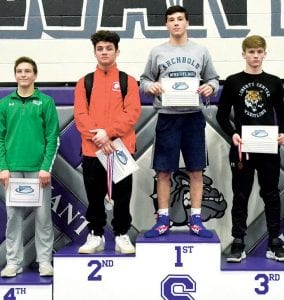 The final seven teams fought to the finish to see who would be the league tournament runner-up.

In the end, Archbold held off Delta to finish second.

As far as the final standings, Wauseon won the NWOAL wrestling championship with 17 points.

Archbold and Delta tied for second with 13 points. Swanton was fourth with 12, and Liberty Center was fifth with 10.

All 13 wrestlers placed for AHS on Saturday. They were led by Gavin Grime’s championship at 145 pounds. 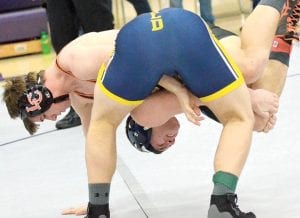 Mason Babcock finds himself in an awkward position as he and Liberty Center’s Tyler Echler both try to score.– photo by Mario Gomez

“Anytime you’ve got 13 guys out there wrestling two-four matches each, there’s going to be highs and lows,” said Brian Becher, AHS head coach.

“Overall I was pretty happy with our performance.

“There are some things we need to get a little bit better at here at the end. It’s not necessarily just technique stuff right now; some guys are breaking a little bit mentally in matches, and they’ve just got to overcome that.” Grime Finally Breaks Through

In his final year of wrestling at AHS, Grime finally reached the pinnacle in the NWOAL by winning his first league title.

Grime battled through the league portion of the season unbeaten and sported a 43-1 record coming into the tournament.

Grime squared off against Montpelier’s Elijah Hutchinson and scored a 42-second pin to advance to the semifinals, where he throttled Liberty Center’s Tyler Kay 17-2 for a technical fall and a date in the finals with Grunden.

In the championship match, Grime held off a pair of Grunden shot attempts in a scoreless first period.

Grime took the down position in the second, but Grunden kept the Streak from scoring an escape to keep the match scoreless.

Grunden took down in the third, hoping to score an escape to take the lead.

As Grunden got to his feet, Grime returned him to the mat and scored near-fall points on an elbow tilt for a 3-0 lead.

“(Gavin) has tilted almost every single kid he’s wrestled this year, so they knew it was coming,” said Becher.

“He’s still able to do it on good guys, and that speaks volumes for him.”

Grunden scored an escape point to trail 3-1 with under a minute to go.

A pair of stalling calls against Grime resulted in a penalty point that narrowed the score to 3-2, but Grunden couldn’t score the winning takedown, and Grime captured his first NWOAL individual title.

“That was a gigantic win,” said Becher.

“To beat a state runner up and go into the (sectional) tournament gives him a lot of momentum and a lot of confidence.” Rocha, Babcock

Rocha wrestled Wauseon’s Hunter Yackee in the championship finals and dropped a 7-0 decision.

Babcock was pinned at 3:48 by Wauseon’s Trent Davis in the championship finals for second place. Sectionals

The sectional tournament starts a new season, where the focus is based more on individuals than a team aspect.

Archbold is the site for the Division III sectional, Friday Saturday, Feb. 23-24.

Wrestling begins at 5 pm on Friday and 10 am, Saturday.

The top four wrestlers in each weight class advance to the district meet at Defiance High School, Friday and Saturday, March 2-3, with the hope of qualifying for the state tournament in Columbus.

“The whole point is to qualify for the next week,” said Becher. “Anybody can do it.

“We’ve had kids that shocked us in the past that we didn’t think were gonna qualify, and we’ve had kids shock us that we thought for sure were gonna get to the next level but didn’t do it.

“It becomes a state of mind.”