AHS Raises Record To 10-2 With Victory Over Locomotives 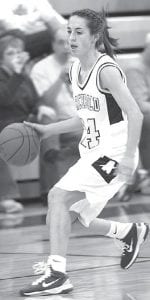 Mindy Rupp, shown against Pettisville on Thursday, Dec. 30, waits for teammates to set up on offense.– photo by Mary Huber

Archbold led by 13 points at halftime and stretched the gap to 20 after three before defeating Montpelier 69-34, Friday, Jan. 7, in girls basketball action.

The victory raised Archbold’s record to 10-2, 3-1 in the Northwest Ohio Athletic League. Montpelier dropped to 1-8, 1-2 NWOAL.

“This was a nice win tonight,” said Brian Ziegler, AHS head coach. “We used good balance on the offensive end.

“I thought we moved the ball fairly well and found the open teammate.”

Eleven Blue Streaks got in the scorebook. Cassidy Wyse and Alicia Drewes led AHS with 12 points each. Jesse Fidler was also in double figures, with 11.

The Streaks led 16-12 after one period and 32-19 at halftime. Chelsea Goebel and Drewes each scored six points for 12 of Archbold’s 13 points in the third, giving the Streaks a 45-25 advantage.

AHS outscored the Locomotives 24-9 in the fourth quarter.

“We did a nice job forcing turnovers and converting them into layups,” said Ziegler. “We are shooting with much more confidence, which is good to see as we get into the stretch run of our schedule.”