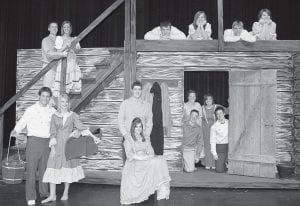 Opening night for the Archbold High School production of the musical Seven Brides for Seven Brothers is Friday, April 11. Cast members are, stage level, from left: Christian Beck and Emily Grisier, playing Daniel and Liza; Garrett Leininger and Audrey Boyers, Adam and Milly; Seth Nofziger and Grace Yoder, Gideon and Alice; Cameron Bible and Nicole Rufenacht, Frank and Sarah. On the stairway are Dustin Kauzlick and Bekah Ruffer, Caleb and Ruth. Upper level of the set are, from left: Steve Bostelman and Jessanna Buschur, Ephrain and Martha; Micah Grime and Erin Cartwright, Benjamin and Dorcas .- photo by Rita Bilen

What happens when a man is looking for a wife when he really wants a full-time maid?

What do you get if his six brothers are looking for a few good women, too?

You get the Archbold High School production of “Seven Brides for Seven Brothers,” a musical for the whole family.

This adventure begins when Adam, played by Garrett Leininger, comes into town looking for a wife, when all he really wants is someone to cook and clean for himself and his brothers.

When Milly falls in love with him, they marry and return to his mountain farm. She then teaches the brothers how to treat a woman in the hopes that each will find a wife.

But, “Adam convinces the brothers to basically steal the women from the town,” Leininger said.

“We’ve been rehearsing since the beginning of January, so it’s a long process. As we are getting closer (to the performance), we are putting in 15- 20 hours of rehearsal a week,” said Kent Vandock, AHS music director.

Christian Beck, who portrays Daniel, said, “Getting started is kind of hard, but once you familiarize yourself with the play, it becomes easier.”

Audrey Boyers, who is cast as Milly, said, “Compared to past years, there’s less music in it, but there is a lot more acting.”

The cast is “making good progress.

“Every practice we come together more as an ensemble, and we become more comfortable with the show,” said Vandock.

In a fight scene, several people have actually been hit. “It’s just a matter of when we’re going to pull it together and quit hitting each other; but it’s looking realistic, so that’s good,” said Dustin Kauzlick, who is playing the part of Caleb.

Has there been anything demanding about the play?

For The Whole Community

The play has something for everyone. “I think that kids will definitely enjoy it,” said Boyers. She also thinks parents can relate to “the marriage aspect of it.”

There is a major dance scene.

“I think we all have a pretty good idea of what we’re doing (with the dancing),” said Jessanna Buschur, who plays the part of Martha.

One of the best parts for the brothers is “basically the fight scenes, because they aren’t choreographed at all,” said Micah Grime, portraying Benjamin.

Vandock said, “I would call it more of a planned chaos.”

There are many people involved in making this play a success. For the students, “it’s been a time commitment for them. They really enjoy it, and they always enjoy big audiences,” said Vandock.

His wife, Danielle, “is my assistant director. Marlyn Krueger does the orchestra pit, Mike Short heads up the set, and there are countless parents who help with the set, props, and ticket sales.

“It takes a real community effort to really get it done,” said Vandock.

“The directors are amazing, and we couldn’t do anything without them,” said Boyers.

To see all of their hard work come together, Kauzlick said, “Come out and see the show.”