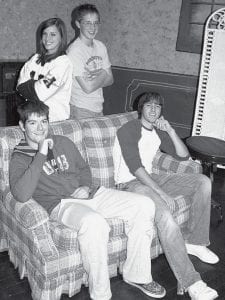 The AHS students are members of the cast of this weekend’s performance of The Nit Wits. Seated, from left: Justin Hines and Dusty Kauzlick; standing: Audrey Boyer and Seth Nofziger. – photo by David Pugh

Audrey Boyer, an Archbold High School student, has her dramatic talents challenged in the AHS fall play, The Nit Wits.

She must don a fat suit, adopt an accent, climb high objects, and jump off to bring the character to life.

She’s just one of eight crazy characters who go to visit a fake psychologist to have their maladies cured.

She said the play, set in the 1920s, is about “a teen boy and his best friend. The boy needs to make money to go back to college, because his dad said so.

“So he becomes a fake psychologist. Eight crazy people come to his home with crazy diseases,” she said.

Boyer said for her, one of the challenges as an actress is the speech accent.

“I couldn’t decide whether I wanted to be French, Swedish, or German,” she said.

Dusty Kauzlick, who’s in the show, said he feels the play is coming together well.

“Everybody has been doing what they should to memorize lines,” he said.

But Seth Nofziger, who plays the fake psychologist, said the lines are difficult, because there are places where one line of dialogue doesn’t necessarily follow another.

“There are parts where the next line just doesn’t come off the top of your head,” he said.

The Nit Wits is being directed by Boyer, Nofziger, and Garrett Leininger, a fellow student. Kauzlick said having student directors has been fun.

“They’re more your age, so they relate to you better,” he said.

“None of us has gone through this (directing a play) yet,” Leininger said.

“Having three directors helps, because you can get together and give each other ideas, and take the best of them,” Leininger said.

The students said the play should be fun for all age groups.