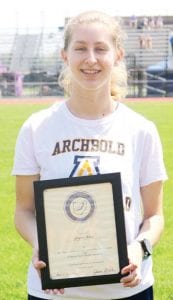 The Pettisville girls team finished fourth and Archbold placed third in the Division III District 1 Track and Field Championships, Thursday, May 16 and Saturday, May 18, at Archbold.

The top four finishers in each event qualified for the regional meet at Heidelberg University in Tiffin, Wednesday, May 22, and Friday, May 24.

“This is always an exciting time of the season. You get to observe a lot of talent in our region and it’s fun when you can claim that talent as your own Archbold athletes.”

“I am proud of all of our athletes for competing to the best of their abilities,” said Gabe Jaramillo, co-head PHS coach.

“Our small community is blessed to have such high achieving athletes, and as a whole, I am excited that Pettisville will be well represented at the regional meet yet again this year.

“A big congratulations is extended to those athletes competing at regionals from myself and the rest of the coaching staff; it is no small task to continue down the tournament trail.”

Dakota Stamm, an AHS senior, repeated her district championship in the 400- meter dash, winning in 57.6 seconds.

Grace Schnitkey, a Pettisville sophomore, won the girls discus throw with a distance of 110 feet, 3 inches.

Qualifying for the regional meet by finishing in the top four at districts with their events and times/distances:

Finishing in the top eight of their events at districts:

The award is voted on by the Div. III Northwest District track officials.