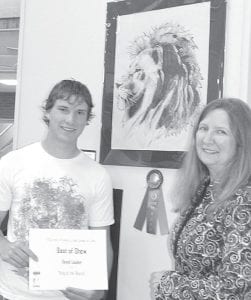 David Lauber, left, with his pen-and-ink drawing, “King of the Beasts,” which won the Best of Show award at the Best of Fulton County High School Art Show, April 14-20. With Lauber is Sue Hurst, AHS art teacher. Archbold and Pettisville students receive several awards for their work.–courtesy photo

The artwork was displayed in the atrium at Northwest State Community College, April 14-20.

“Once again, the show was an impressive display of local high school talent, which made some difficult decisions for the judges, said Diane Tinsman, BSAC president.

“We heard so many positive comments from NSCC faculty, staff, and students about the quality of the artwork. They couldn’t believe it was a high school show,” she said.

David Lauber, an AHS student, won the Best of Show award for his pen-andink drawing, “King of the Beasts.”

Stacy Wyse, also of AHS, received an honorable mention for her acrylic painting, “The Eyes of Africa.”