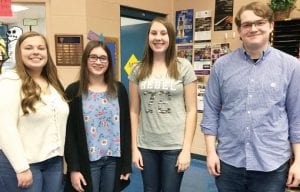 Archbold students participated in the Ohio Music Education Association solo and ensemble competition, Saturday, Feb. 3. Left: Among those participating in the vocal music competition were, from left: Hannah Bowers, Kate Nofziger, MacKenna Whitacre, and Jeremiah Hartman. Right: The clarinet quartet of Kaitlyn Elkins, Ariah Qaimari, and Kelly Bilen warms up before their performance. Riah Short is out of the frame, off to the left. Assisting is Frank D’Ambrosia, a volunteer, while holding sheet music are Justin Howard, Dana Voll, and Hartman.– courtesy photos

The contest was for solos and ensembles.

Some students competed in vocal and instrumental contests.

On the vocal side, Kent Vandock, director of choral activities in the Archbold schools, said Kate Nofziger earned a “I,” or Superior, rating with her mezzo soprano solo.

Both competed in Class A.

Kelly Bilen performed an alto solo and received a Superior in Class B.

Others earning Superiors in Class B were Will Nofziger, tenor solo, and Maggie Henry, mezzo soprano solo.

Simon Short performed a baritone solo, which earned a Superior in Class C.

Earning a II, or Excellent, rating in Class A was Hannah Bowers with a mezzo soprano solo. 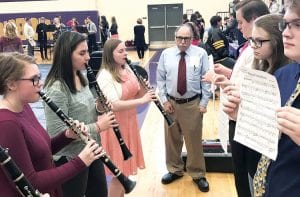 Bowers also received a III, or Good rating, in Class A with an alto solo. MacKenna Whitacre earned a Good rating for her mezzo soprano solo in Class A.

In Class B, Ivan Cobb earned a Superior in a French horn solo. Hartman and Dana Voll earned Superiors for trombone solos, and Bilen had a Superior with her clarinet solo.