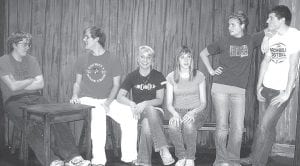 The Archbold High School production of the musical “Oklahoma” features comedy, romance– and a little horror?

The horror part comes from John Hartman, an AHS sophomore who plays Jud Fry. Five other AHS thespians describe his role as “the creepy cowhand.”

Hartman said it was hard at first to get into the character of Jud “because you have to be cold-bloodedly creepy.”

Bailey Mayer, a sophomore, plays Laurey, the object of a love triangle between the creepy Jud and Curly McLain, a cowboy.

Mayer said once Hartman gets into character, “There’s no stopping him. He never leaves character. It’s especially terrifying for me, because I’m the one getting creeped on. I get physically scared of him.”

“I have trouble switching my voice back to normal after I’ve been talking like him for a while,” Hartman said.

In the end, Curly and Jud confront one another for Laurey, and the confrontation is intense.

Hartman and Jarrett Yoder, a junior who plays Curly, said it’s difficult to maintain the intensity.

“It’s hard not to smile or laugh,” Yoder said.

There’s a subplot that provides some comic relief between Mylee McQuillin, a sophomore who plays the flirtatious Ado Annie, and Eliot Nofziger, a senior who portrays Will Parker, whom Yoder describes as “those two yahoos.”

During the show, all of the cast members, except one, adopt a southwestern kind of accent, and the thespians say that accent is infectious.

“We’ll catch each other randomly during the day, speaking with the accent,” Mayer said.

“I have to try to talk normally sometimes,” McQuillin said.

As a musical, there’s plenty of music and dancing.

“This year, there are three or four big dance scenes,” Yoder said.

The dancing is coming along, “but like every year, it’s the last week when it all falls together.”

“Easy to learn, and it looks good,” Mayer said.

Yoder said the music is coming along well.

“I think it’s the best of anything,” he said.

“All the music is so catchy,” Nofziger said. “It’s easy to catch onto. It gets stuck in your head. There’s not any one song I don’t like,” he said.

Nofziger said “Oklahoma” is one of the most fun shows he’s been involved with.

Haley Behnfeldt, a junior who plays Aunt Eller, Laurey’s aunt, said, “this is the first time I’ve had a big part. My part is funny and fun.”

Whoever likes comedy and romance will like the production, cast members believe.

“But the little kids will be scared of me!” Hartman said.