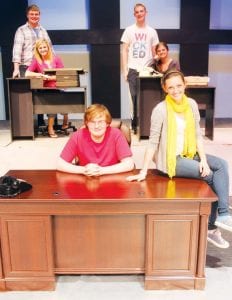 Some of the cast members of the AHS musical, “How to Succeed in Business Without Really Trying,” on stage. Front row, from left: John Hartman, Tressa Parsley. Back row: Adam Steider, Brie Deskins, Caleb Wyse, and Mylee McQuillin. Steider called the show “a big business satire.”– photo by David Pugh

The staff and students who put on Archbold High School stage productions were impacted by the death of one of their cast members.

As cast members prepare for the musical, “How to Succeed in Business Without Really Trying,” Anthony “Tony” McCoy, died in an auto accident Friday, April 6.

He was one of two students killed during the first week of April, one of three young persons who died in the community in about a month.

“It was the whole school,” she said.

McCoy “was friends with a lot of people. He was really liked,” said Mylee McQuillin, a senior.

“The boys have a big scene where they talk about the brotherhood of men,” said Tressa Parsley, a junior. “I always liked watching them. It’s weird not to see him there.”

Caleb Wyse, a junior, said McCoy “gave it (the musical) his all. He loved it.”

Kent Vandock, director of choral activities at AHS, said McCoy’s role in the play was secondary, but he did have lines. They were able to spread his lines to other characters.

Adam Steider, a junior who plays the lead character, J. Pierpont Finch, said the show is “a big business satire.”

The premise of the show, McQuillin said, is Finch, a lowly window washer, finds a book titled, “How to Succeed in Business Without Really Trying,” that explains how to climb the corporate ladder.

“He jumps into the window of the World Wide Wickett Company,” and the show follows him from there, Wyse said.

Deskins said today there are tablet computers and other technology, but some of the props in the office set are typewriters.

“Everybody is just fascinated by these typewriters. Somebody is always typing on them,” Deskins said.

In fact, it got so bad, Vandock has placed a ban on typing during rehearsals.

And, in a culture raised in jeans and T-shirts, the dresses and suits of the 50s were a change.

“In musicals, we always wore dresses. That’s part of the fun, getting to dress completely different,” Parsley said.

“The girls have to remember to sit differently,” Deskins said. “We have to be more prepared than the boys.”

Wyse said he didn’t realize when a man gets a suit, “it’s fit to your size.” An exceptionally tall youth, “I always have to get my pants lengthened,” he said.

But, the cast members said they’ve seen the personalities of the characters before, so they are familiar with how to play them.

One of the most challenging parts of the show is the set.

At different times, the stage becomes offices of varying sizes, an old-fashioned mailroom, a barbeque, and the setting for a party.

There are a lot of scene changes.

“It’s different from anything we’ve done before,” Wyse said.

Vandock pointed out the show gives the students an insight into the gender roles of the day.

Steider said many young people may not understand all of the cultural references of the show, but they will still pick up the energy and excitement on stage.

“There’s a lot of visual humor they can pick up on,” McQuillin said.