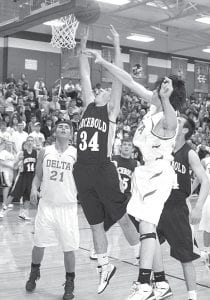 Archbold locked up at least a share of the Northwest Ohio Athletic League boys basketball title with a 64-54 win at Delta, Friday, Feb. 11.

“This is a great win for us, to go on the road and clinch a championship against a quality team,” said Doug Krauss, AHS head coach.

It is the 22nd league title, either shared or outright, for Archbold. The Streaks were the defending league champions.

Archbold can win the NWOAL title outright with a victory at Liberty Center, Friday, Feb. 18.

Patrick Henry is second in the league with a 6-1 record.

The Panthers took an early lead on a three-pointer by Ryan Callahan, who led Delta with 21 points. Archbold answered with a threepointer from Zeb Frank.

Delta’s Blake Green hit a jumper, but Archbold rattled off the next seven points. Frank buried his second three, Garrett Morton added a deuce, and Telly Fricke converted a turnover for two and an AHS lead.

Frank hit his third three of the quarter and Telly Fricke added a trey at the buzzer for an 18-11 lead.

Frank started the second period by nailing his fourth three of the night to push the difference to 21-11. He was one of three Streaks in double digits, finishing with 15 points. Fricke led the way with 18; Morton chipped in 10.

“We were able to get Zeb open and he made some shots, and that certainly helped,” said Krauss.

Archbold’s Clay Giesige banked in a three to start the final quarter and Frank hit a deuce.

Green cut into the lead with a drive along the baseline.

Trailing 50-39 with 4:18 left, Jacob Prather connected on one from the charity stripe.

The Panthers sent Tyson Dietrich to the foul line. The AHS sophomore canned both attempts to push the difference back to 10, 52-42.

Josh Beverly brought the Panthers right back with a three. While the Streak offense was coming up empty, Green added two more on a put-back to close the gap to 52-47 with 1:10 left.

“We knew going in we would have to take care of the ball and get rebounds, but in that second half Delta got after it. They are a wellcoached team and have some animals underneath,” said Krauss.

Archbold didn’t score another field goal in the quarter but went 14-18 at the foul line in the final stanza. Morton hit a foul shot, and after Delta came up empty on its next possession, Fricke added two more free throws to push the lead back to 55- 47.

The Panthers again came up short. Frank hit one of two from the foul line for a 56-47 lead with under 50 seconds to play.

Beverly drained a three and immediately called a time-out. Out of the time-out the Panthers fouled Giesige; the senior made both free throws for a 58-50 lead.

Green was fouled on the Panthers’ next trip down the court. He connected on both free throws, but the Panthers were out of timeouts with 26 ticks left on the clock.

Delta was forced to foul, and the Streaks capitalized, finishing the last seconds of the game at the charity stripe. Fricke went 4-4 and Dietrich connected on 2-2 in the closing seconds.

“We just couldn’t finish consistently underneath, but Telly (Fricke) made his foul shots,” said Krauss. “He missed a few, but nailed them at the end.

“In a game like this, that is where you win the ball game– at the foul line. We went to the line and connected.”