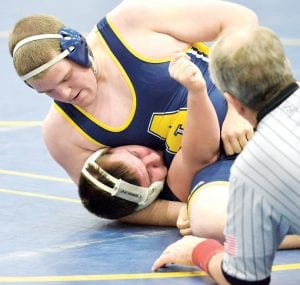 The Streaks laid the hammer down on Montpelier 54- 16 and took PH out to the woodshed 66-6 to run their NWOAL record to 3-1.

It was the final league matches that seniors Anthony Gonzalez, Gavin Grime, Trevor Short, Colton Soles and Nibel Welch would wrestle in the Thunderdome.

“Both those teams are down,” said Brian Becher, AHS head coach. “But in the big matches we didn’t win a single one of them, and that’s kind of how I look at it.”

Wrestling started at 152 pounds, with Grime winning on a first-period fall.

In the final match of the night, the Streaks dropped just two matches to earn the win.

With the season only a month old, the Streaks are essentially preparing for the end of the season with matches and tournaments taking place the next several weeks.

“You get through the Christmas break and you’ve got two weeks with just one event,” said Becher.

“You get back into school and it really does go fast from here on out.

“We’ll be going a little bit more intense (in practice). Not as much teaching as a group, but teaching individual stuff to what guys do themselves to get more finetuned.”